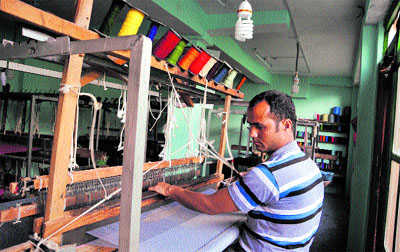 BY HAND: Working conditions and wages of artisans need to be improved.

RECENTLY, the US Presidentelect Donald Trump said, ‘Buy American and hire American.’ He made the loss of American jobs due to outsourcing and globalisation a big election issue. His protectionist slogan, if translated into policy, will however have a dampening effect on developing country exports.

PM Modi’s ‘Make in India’ campaign also aims at job creation. Apart from aiming at creating factory jobs, proper infrastructure can create many jobs in rural areas. In India today, many young people leave their rural homes to earn a living in big cities but end up becoming daily wage labourers, mostly at construction sites. Many are from very skilled weaver, potter, leather working castes. Instead of practicing their craft, the lure of the urban draws them towards towns and cities.

Some years ago, I met very skilled Baluchari sari weavers in Vishnupur who had become potato sellers in nearby Singur and Kolkata out of necessity. Baluchari saris with their intricate woven patterns in silk were very expensive to boot, hence demand was stagnant. There was little work for half the month for the weavers.

India should be proud of its millions of handicraft workers who are fast disappearing. We could become like the US where handcrafted products are only available in museum-like stores costing a fortune. The machine age and the digital age with its 3D printing has eliminated the human touch from most products.

In fact, many products are manufactured in India that are ‘untouched by hand’. We, with more than a billion pair of hands, should avoid making anything that is untouched by human hands. Why should we not advertise instead ‘Made entirely by human hands’ or ‘Hand-made in India’.

With better consciousness about the ecological damage caused by Chinese factories to their own water and soil, China would be more than willing to buy hand-made goods from India. Trump may also be impressed with Indian hand-made products that have not snatched away any American jobs. True, artisanal products have many imperfections but each item is unique according to the skills of the artisans. Our efforts should go towards teaching people to make zero or low-defect hand-made products.

It will be difficult to direct FDI to hand-made product industries because there are no big bucks in them, but even so, a few foreign investors are going to such industries. All handicrafts and handloom industries are labour intensive and absorb many people-men and women. Some are immensely profitable over time like hand-made paper and products industries.

Next in importance would be creating the demand. Most of these handcrafted industries though they have low raw material costs and are mostly nature based are facing a sharp decline in demand. Women’s magazines TV and newspapers are full of ads about machine-made, mostly imported slick products, for home décor and fashion.

You are not with the Jones if at a dinner party you are serving out of handcrafted Jaipur or Khurja pottery bowls! One may be too ‘ethnic’ if you are seen in handlooms only. Some magazines show models sporting handbags whose prices are ‘not listed’ but are available on request. They run into lakhs! Surprisingly, people are buying them.

India has great leather goods and even years ago while researching on India’s leather exports, I found that leather coats made in India were being exported to Scandinavian countries where they changed the label from ‘Made in India’ to ‘Made in Norway’. We have to make products that will sell abroad because they are ‘made in India’. The Indian brand should become world famous.

If Modi is truly interested in job creation he should perhaps give more incentives to Indian village industries that use natural local products and are made by hand mainly. Instead, he is seeking big investors who will require more land, more minerals and more machines. There will be more land acquisition and more people are likely to be displaced from their land and more capital-intensive production, as foreign investors do not want to deal with labour problems. There will be more jobless growth.

Fortunately, some women entrepreneurs and creative thinkers started Seva, Dastakar and various craft bazaars, including Dilli Haat. They have revived India’s crafts and given opportunities to women to earn money by selling their crafts. People in the public gaze should be seen patronising these goods, especially the glitterati and Bollywood.

We should also be careful of abiding by the label often used by IKEA, ‘No child labour has been used’. If we do not eliminate child labour, the export potential of hand-made carpets and dhurries specially will be lost.

Most importantly, the conditions of work of artisans ought to be greatly improved. India’s famed jewellery and gems exports carry many tales of woe. I have seen semiprecious stone cutters and polishers work in dismal and dangerous conditions in Gujarat. The stonecutter’s wage usually is very low and even though skilled in his art, he continues to live in poverty. We shall lose all these skills if the workers’ working conditions and wages do not improve. Once lost, these skills cannot be reborn.

Handicrafts and handloom textiles are very important export earners and with a boost from the domestic market, the millions of workers will find it lucrative to practice their crafts again. India exported Rs 21,457.91 crore of handicrafts in 2015-16 and Rs 151.83 crore of handlooms in 2014-15. The demonetisation has affected the sector adversely as it is cash based.

The government has a role to play by giving information to artisans’ groups where and whom to sell and organise trade fairs abroad and at home. Artisans, when interviewed,  always complain about red tape and bureaucratic corruption. They also need an idea about the demand at home and abroad. Private sector entrepreneurs have pitched in a big way and have introduced innovative designs using our own natural materials. They have found niche markets abroad for products ranging from high fashion items to things more common.

Often instead of encouraging them further, the government agencies create obstacles for them to function smoothly. Modi’s ‘Make in India’ drive could cover all exporters, including those of handcrafted products.  The symbolic lion’s body ought to have handlooms and potter’s wheel and not just gears and machine tools.