FOR the uninitiated, langar gups are rumours in the Army that emanate from messes, where uniformed persons gather and discuss issues pertaining to the military in general and the Army in particular. 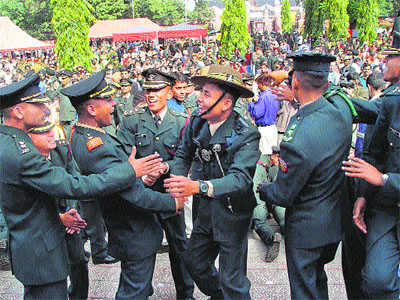 ARM IN ARM : Institutions like the Army are far too important to be fiddled with.

FOR the uninitiated, langar gups are rumours in the Army that emanate from messes, where uniformed persons gather and discuss issues pertaining to the military in general and the Army in particular. Although langar refers to jawans’ messes, the term generally refers to discussions where officers and jawans congregate and ‘shoot the breeze’!

For over a month, when the appointment of the new Army Chief was not announced, speculations evolved into langar gups, with all kinds of permutations and combinations emerging. Many claimed inside knowledge about who will be the next Chief and the rank and file, besides being perturbed as to why the announcement was not forthcoming, rightly smelt that the powers that be were up to some hanky-panky! The startling news about the appointment of the next Chief confirmed it.

Generally, appointments of new incumbents at the higher levels of the armed forces are announced two-three months in advance. This is because unlike hierarchies of the police, bureaucracy and others, the armed forces, being the custodians of the nation’s security, are much more important appointments and need to be announced much before time. If this is not done, not only the contenders remain on tenterhooks, but also wrong signals are sent across the board that ‘all is not well’. In the last few months unfortunately, even the Headquarters Command remained headless over months and hence it was clear to the discerning that the politico-bureaucratic combine was up to something. The announcements of the new Army and Air Chiefs at such a late stage have confirmed such misgivings.

In countries like Pakistan, where elected representatives are mortally scared of the powerful army that can manoeuvre a military takeover in a jiffy, it is standard for the elected elite to weigh all consequences till nearly the last date, but in democracies such things do not, and must not, happen. Therefore, the only conclusion is that the leaders and their advisers are up to no good.

Announcing that Lt Gen Bipin Rawat will be the next Chief, superceding two Generals senior to him, smacks of arrogance and stupidity on the part of the government. Lame excuses of operational experience or lack of it does not cut ice with veterans like me who are experienced and are au fait with the tricks of governments. Officers are posted to appointments in accordance with well laid out systems based on their profiles, and no one opts for so-called operational appointments or otherwise. It is all the luck of the draw and when officers become Army Commanders, they all are professionally the best, otherwise they would not have reached such exalted heights.

In my view, it is more important to have a full tenure as an Army Commander and not a truncated one of a few months to command the third largest Army in the world. Commanding at various levels up the chain adds to one’s experience as a professional, but it will be naïve to place experience of commanding an Army lower than commanding units and formations at subordinate levels, whether in counterinsurgency operations, on the borders, or elsewhere.

It is, no doubt, the prerogative of the government of the day to appoint whoever they consider meets their criteria, but governments usually think many times before grossly interfering with what has generally been happening in the past. Trotting out excuses, justifying their actions and scotching perceptions with lame excuses, tend to reinforce that there was some skullduggery indeed. Yes, even in the past there have been a few instances where the seniority principle was sacrificed, but they were quite unconvincing.

The easing out of General Thorat by the then combine of the Prime Minster and the Defence Minister and appointing General Thapar instead, was a case of sacrificing merit and professionalism at the altar of sycophancy that resulted in the biggest debacle for our country in 1962. The excuses now trotted out were uttered earlier too, when the highly professional and greatly admired the late Gen SK Sinha was passed over, ostensibly for lack of operational experience, when the actual reason was that he was opposed to military action against Punjab militants; what followed is well known. In keeping with the credo of an officer and a gentleman, he resigned. Later, the same General (with less operational experience, as the government had averred) was appointed Governor in two insurgency-infested states, which he managed with aplomb! Even earlier, the highly professional, highly decorated and a soldier’s General — PS Bhagat — was denied his rightful appointment based on whims and ulterior motives by another PM. In each of these cases, the political leadership succumbed to manipulators, mostly bureaucrats, sycophants and parochial advisers.

At this stage, I need to narrate a discussion held on the sidelines of a seminar at the College of Defence Management, Secunderabad, many years back. Military intellectuals Gen Raghavan and Air Vice Marshal Kak and I discussed the pros and cons of selecting a service chief on the basis of seniority, as was the norm, vis-à-vis an open-ended selection. We came to the conclusion that there were more negatives in the latter, as chances of selection based on political, sycophantic and non-professional reasons may become predominant in due course, with professional and character qualities being sacrificed on account of extraneous issues. With such precedence, even appointments of the Army and Corps Commanders may meet such a fate later.

I have no quarrel with the Chief-designate, as I hardly know him, but it is the principle that is of utmost importance. Institutions like the Army are far too important to be fiddled with because of political or other considerations. We are fortunate that we have an apolitical and a competent Army, which will continue to conduct itself with élan and pride irrespective of who leads it. We have had a gamut of average leaders, along with a few highly superior ones, but the Army has weathered all storms.

If the present PM continues with his dictatorial ways, like the first PM of Independent India did, without consulting advisers who would give him unbiased advice, the nation is in big trouble. Rhetorics with modulated utterances may go down well with ignorant masses, but they are no substitute for good governance. It is only Modi bhagats, including the few still in the armed forces with their personal agendas, are quoted by the sarkari propaganda machine and the paid media, while the bulk of the citizenry is not at all convinced.

The moot point remains, the nation and the Army need a Chief who delivers and not one who sways with the wind because he is grateful for small mercies. I hope that the new incumbent will take the Army to greater heights of professionalism and not succumb to blandishments and sweet words.

The writer is a former Vice-Chief of Army Staff