THREE deadly strikes on the same day — Friday, June 27 — in three different continents, without any strong evidence of a central command and direction, should be demoralising to all those working to strike a decisive blow at international terrorism. 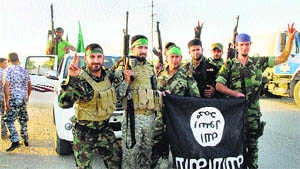 The sinister sway of ISIS is rapidly expanding, which is worrisome.

THREE deadly strikes on the same day — Friday, June 27 — in three different continents,  without any strong evidence of a central command and direction, should be demoralising to all those working to strike a decisive blow at international terrorism.

Coupled with the successful thrust of elements affiliated to the ISIS in the Sinai region of Egypt that immediately followed, there is everything to suggest that we are in for major catastrophes, not merely in the Middle East but across the globe, in the near future. The woeful lack of advance intelligence, especially at the micro level, to quell those striving to destroy peace all over the world in the name of religion is a great worry. Recent trends make the scene murkier and more dangerous than before.

The abhorrent violence that we saw in the Middle East and elsewhere recently has economic implications too, because it should put off the avid European tourist who simply loves the sunny Mediterranean beaches, and must have been scared out of his wits by what took place at the Sousse beach in Tunisia on the fateful day. Tourist attractions the world over, which are widely known as favourites of the West, are difficult to protect, and should be easy targets for more attacks at periodic intervals.

Together with what happened in Kuwait City (attack on a Shia mosque) and Lyon (beheading of a transport manager) on that day, the triple happenings are a reconfirmation — if one were needed at all — that we are not likely to witness any soon the end of the battle against a psychic aberration that has gained firm control over the minds of a large number of Muslim youths across the globe.

In the Tunisian outrage, the gunman, Seifeddine Rezgui (23), was confronted at the spot and shot dead. In the other two incidents, speculation is they were ISIS-inspired. The latter has actually claimed responsibility for the Kuwait mosque attack. Any further debate over this seems pointless, because, unlike when the monstrous Al-Qaeda (AQ) was holding sway until a few years ago, terrorism of the current variety is far from centrally directed. Its perpetrators are dispersed geographically and belong to several groups, chief of which is the ISIS, whose phenomenal influence built over just two years, portends serious trouble. The ISIS displays no visible hierarchy that has taken charge or directs operations. It is this characteristic of the organisation that makes counter-terrorism now so much different from the AQ variety.

Fundamentally, the ISIS is deadlier than the AQ, especially because barbaric acts, such as beheading of hostages (including women) and vandalism of historic monuments seem to come naturally to it. No pangs of conscience on the part of its leadership has till now been reported. What is of greater concern is its rapidly expanding sway. The impression that is gathering ground points to a dexterous strategy that would take the jihadists beyond Iraq and Syria. Groups from at least 20 nations have pledged support to the policy of violence that masquerades as a religious diktat to clean up a defiled world and establish a caliphate across the globe. A report speaks of one-third of Muslim students in Britain lending support to the foggy concept that conceals more than what it reveals.

The ISIS leadership seems to have been successful in its planning, as reports point to recruits flowing in sizeable numbers into the Syria-Iraq region from many parts of the world. There are frequent reports of whole families arriving in Syria via Istanbul to join the jihad. (India has certainly contributed to this dubious traffic, although exact numbers are still in the realm of guesswork.) This development fits in with the belief that the ISIS is itching for a major confrontation with the West so that, as in the case of AQ, the former's appeal to the Muslim population goes very much beyond the Middle East. In a way, the ISIS is a recreation of the AQ under a different label.

Two recent reports, in particular, are interesting and significant. They highlight the growing female fascination for the ISIS. Militant Leadership Monitor, a periodical brought out by the Jamestown Foundation, Washington DC, refers to a Syrian revolutionary poetess Ahlam al-Nadr, who has arrived in Raqqa, an ISIS stronghold. Married to a prominent jihadist propagandist Muhammad Mahmoud, she has been lyrical in spreading the message in favour of the caliphate. The couple's appeal to Islamic families across the globe cannot be underestimated. One should not be surprised if more and more women and married couples jump into the fray. There are already reports of whole families disappearing from the UK into Turkey, and therefrom to Syria or Iraq.

Then there is the case of Alex, a 23-year-old schoolteacher and baby sitter of the US, who shared with The New York Times vignettes of her life, involving encounters with jihadists. She confessed  having succumbed to online religious propaganda by people whom she had only met in cyberspace and converting herself to Islam. She leads a double life, teaching at a church and interacting with an online jihadist group. She is under pressure to recruit candidates to the ISIS cause, and has been unable to extricate herself from a dangerous engagement that could sooner or later attract law enforcement interest.

What is most striking in all this is that the average terrorist no longer seems to need huge physical resources or a well-knit organisation for a successful assault. The 'lone wolf' who acts on his own is also very much a reality. It is therefore pointless to quibble on who was responsible for each of the three recent attacks. Prudence demands that we concentrate on 'target hardening', whereby the aggressor has to strive harder to succeed in his diabolical plans. The endeavour should be to protect as many public congregations (like the Tunisian beach) as possible to deny soft targets. India should take particular notice, because, as a nation, we thrive on large assemblies, which are part and parcel of our major religions. Guarding them from terrorism is simple on paper, but extremely problematic in execution. Nevertheless, the effort to contain terrorism can never be given up, if posterity should enjoy peace and tranquility.

There is a widespread feeling that Islamic religious leaders the world over have done precious little to contain terrorism. The criticism may not be wholly correct. But then such leaders will have to be more demonstrative in their denunciation of violence, If only to make a difference to the rapidly deteriorating situation. Sadly, this has not happened. The parents of Rezgui, the Tunisian attacker, have professed ignorance of their sons's activities in support of jihadism. The same is the case of many other parents, including a few from India. This is a rather painful reflection of a major shortcoming of the scene that has contributed heavily to perpetuate youth infatuation with jihad. The permissive ambience within the modern family is a great aid to terrorism. Unless this situation is reversed, we may not see any major change in the galloping power and influence of fanaticism of the Islamic variety.

(The writer is a former CBI Director.)