I had never accepted what I maintained was the cynical comment of George Bernard Shaw that “Politics is the last resort for a scoundrel” or even the more cynical one of Samuel Johnson, who noted that “Patriotism is the last refuge of a scoundrel”. But my resistance has got a blow from the simulated outburst of patriotism by almost all political parties at the release of Masarat Alam. 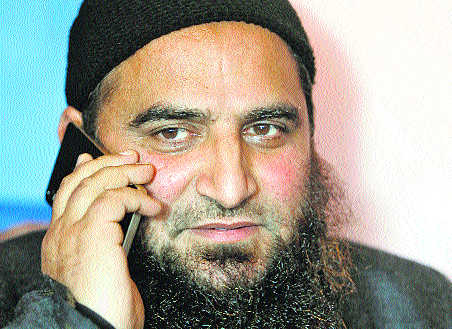 I had never accepted what I maintained was the cynical comment of George Bernard Shaw that “Politics is the last resort for a scoundrel” or even the more cynical one of Samuel Johnson, who noted that “Patriotism is the last refuge of a scoundrel”. But my resistance has got a blow from the simulated outburst of patriotism by almost all political parties at the release of Masarat Alam.

How hollow and politically motivated was the whole debate! The facts in Masarat Alam's case had left the government with no choice but to release him. He was on bail in 27 cases, though charged under the Public Safety Act. His detention was revoked by the Congress-National Conference government under a Supreme Court order in March 2013. The court had commented adversely on the misuse of power of detention. More significantly, the release order was issued during Governor's rule with the Modi government at the Centre. Ironical that the Left and other non-Congress political parties should insist on the detention of Alam under security and public safety laws when all this time they had been agitating for the repeal of these draconian laws.

The hypocritical stand of the Congress-National Conference combine is nauseating. It very glibly offered unconditional support to the Mufti to form a government and promised him full support from outside. Is the anger now borne out of the frustration that they were not able to block the coming together of the PDP-BJP government? Even Congress leader Soz, who knows the real situation in J&K, has openly said that Alam's release was necessary. And yet the Congress floats its opposition from M.P.s from Gwaliar/Rajasthan who have little knowledge of the reality in J & K.

The Congress role is still more hypocritical. It has had a coalition with the Mufti in the past. For practical reasons the Mufti-BJP coalition was inevitable. It alone could provide a sense of participation to all the regions in the valley. It inevitably meant that the BJP would have to forego its dangerous and loud-mouthed noise about abrogating Article 370. Does not the Opposition appreciate that, even though under coalition pressure, the BJP silence over the abrogation of Article 370 will be a blow to the communal and undemocratic wing of the RSS?

Prime Minister Narasimha Rao had played a positive role in dealing with the Kashmir problem. His practical approach was shown in the situation created by Yasin Malik, who had publicly abandoned the resort to armed militancy but was maintaining peaceful public protests. It so happened that Yasin (possibly in 1994) went on hunger strike to demand an inquiry by Amnesty International into killings by security forces in J & K. This demand for international involvement was outrageous and could not be conceded. His condition became very serious endangering his life. Yasin then suggested that he was agreeable to have an inquiry by the People's Union of Civil Liberties (PUCL). Rao agreed that if he broke his hunger strike, the Central government would agree to an inquiry being held by the Indian N.G.O.

Though Yasin agreed to break his hunger strike but set a pre-condition that he would do so at Srinagar before his family and party colleagues. Yasin's physical condition was so serious that the continuation of hunger strike could pose a danger to his life. Rao and Rajesh Pilot (Minister of State for Home) understood the delicate situation and did not stand on false prestige and arranged a special plane the very next morning to fly Yasin and two PUCL activists to Srinagar, where he broke his fast. There was Governor's rule. Even the Governor was kept out of loop. None suggested that this was an unpatriotic act endangering the security of the state or it showed the weakness of Rao or Pilot. On the contrary, it eased the tension and allowed talks between the government and militants to resume.

Much is made of the fact that Alam is a follower of Geelani and is therefore a danger to the security of the state. How laughable! Geelani is a free man and goes everywhere, and even meets the Pakistan High Commissioner. Rightly the government has not taken any action against Geelani. It was P. Chidambaram as Home Minister who initiated the talks with Geelani and other Hurriyat leaders in 2010. What is so magical or mysterious about the release of Aslam that his release caused such a furor among all sections in Parliament?

How sad that it did not strike all these worthies as to what message was being sent to the people of J & K, especially to the parents of children who were shot by the security forces in return for stone-throwing. Must India display the same demon-like face, which I had seen in 1993 on a visit to Kashmir as a member of the PUCL delegation? On my return, I had observed: “I do not know how and in what manner the Kashmir question will be solved with its nuances of ‘azadi’, plebiscite and greater autonomy. But one thing is certain — India would remain a loser unless the face that it presents to the people of the Kashmir Valley is humane, compassionate and understanding. At present that face is ugly and insensitive”.

It is to be hoped that there would be a quietus to this outrageous provocation by the Opposition. I am quite sure the Mufti is too senior and suave a politician (who has also passed through the deepest agony of his daughter’s abduction during militancy in J & K) to let anger overtake him. He understands the delicate situation in J & K and realises that if the present opportunity is not utilised effectively, we could be in deep waters again for a long time. Will the Opposition make a genuine effort to prove George Bernard Shaw wrong?