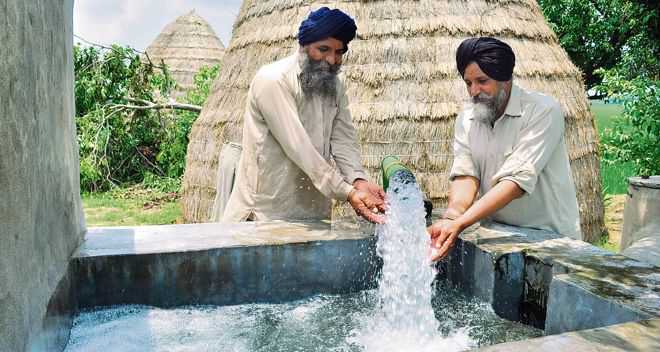 RelooK: Punjab should desist from pushing more machines and chemicals into farming.

PRESENTING this year’s budget, Punjab Finance Minister Manpreet Badal sounded an ominous warning. Not that it wasn’t known earlier, but this was yet another official acknowledgement of a worrisome future scenario that is fast pushing the frontline agricultural state towards desertification and an impending ecological disaster: “76 per cent of the assessed blocks are over-exploited and the estimated groundwater availability for future irrigation use is negative.”

The warning had been sounded earlier. The two reports on crop diversification in 1986 and 2002, authored by eminent agricultural economist Dr SS Johl, were essentially in response to groundwater depletion. I remember Dr Johl making a very strong point as to how Punjab ends up virtually exporting water when it transports surplus wheat and paddy every year to the deficient areas. Later, in 2009, the observations of NASA’s Gravity Recovery and Climate Experiment (GRACE) satellite data showed an equally worrisome trend. “We don’t know the absolute volume of water in the northern Indian aquifers, but GRACE provides strong evidence that current rates of water extraction are not sustainable,” hydrologist Matt Rodell of NASA was quoted as saying. Subsequently, a number of studies by the Indian Council of Agricultural Research, Central Ground Water Board and Punjab Agricultural University, among others, have pointed to a grim future.

Speaking in the Vidhan Sabha last month, Chief Minister Capt Amarinder Singh said the state had run out of options and there was an urgency required to tackle the water crisis, which may include changing the cropping pattern, going in for crop diversification and so on. But after all these warnings, the Finance Minister ended up reiterating the government’s resolve to address the problem of groundwater depletion, using jargon like ‘judicious, sustainable and equitable’ use to manage water availability, and eventually informed the House that the government was in talks with the World Bank to find a workable solution. This clearly showed the lack of political courage to take the bull by the horns.

Like the previous governments, the Congress dispensation, too, has shied away from initiating any significant step to move away from water-guzzling crops, primarily paddy, lest it upset the predominant vote bank. Interestingly, almost at the same time the budget session was in progress, the coordinator of the All India Kisan Coordination Committee, Yudhvir Singh, while addressing a series of meetings organised by the Bhartiya Kisan Union (Lakhowal), was asking farmers to shift not only from paddy cultivation to restore groundwater, but also move away from intensive farming to agro-ecological practices. He wanted them to devote at least one acre out of the total land area to non-chemical agriculture. He urged farmers to reduce the crop output. “Your problem is that you produce more. If you were to reduce production by 10 per cent on an average, you will get a better price for your harvest and also save on chemical inputs.”

With 98 per cent assured irrigation, and having the highest crop productivity in wheat, rice and maize — the cereal crops — Punjab has the dubious distinction of turning into a hotbed of farmer suicides. With over 16,600 farm suicides, including farm labourers, documented in a house-to-house survey between 2000 and 2017 by three public sector universities (Punjab Agricultural University, Punjabi University and Guru Nanak Dev University), there was ample evidence for a relook at the intensive farming model that the state had adopted. World Bank had played a crucial role in pushing the intensive and exhaustive farming model, and to expect the same institution to help in improving the management of its scarce resources showed that the state had not learnt any lessons.

Albert Einstein had said: “We cannot solve problems by using the same kind of thinking we used when we created them.” We cannot ask the same people who were in a way responsible for the crisis to provide solutions. First and foremost, the time is ripe to move away from intensive farming, which has triggered massive environmental degradation and pushed the food bowl to the brink in terms of sustainability. The impending ecological disaster will not be addressed by changing the cropping pattern. A recent study by the Centres for International Projects Trust, a Columbia University initiative, has after a detailed study on water budgeting shown that crop diversification will not make much of a difference in the ultimate water balance.

What Punjab needs is a change in the farming systems. It is time the state government does a rethink on the integrated farming systems that need to be evolved. If Andhra Pradesh can launch Zero Budget Natural Farming with the aim of converting all its 60-lakh farmers to non-chemical agriculture by 2024, I see no reason why Punjab cannot at least initiate agro-ecological methods of farming for the marginal and small farmers, to begin with. Considering that every third farmer in Punjab is below the poverty line, this is the community that needs immediate handholding. Instead of pushing more machines and chemicals into farming, using the Rs 6,000 per year direct income support allocated under the PM-Kisan scheme, Punjab should supplement it with its own contribution and like Andhra Pradesh provide at least Rs 15,000 per year. This package should be linked to agro-ecological farming systems. In Karnataka, a direct income support of Rs 10,000 per year is announced for farmers cultivating millet crops.

In Chhattisgarh, instead of going in for increasing crop productivity to emerge out of the prevailing farm crisis, the new Congress government has incorporated the traditional Narwa (water), Garuwa (livestock), Ghurawa (compost/biofertiliser) and Baadi (backyard cultivation) in an interesting agro-ecological approach to be accomplished at the panchayat level. After all, extraordinary problems need extraordinary solutions. More of the same will only exacerbate the crisis.

Punjab has to begin with reframing and redesigning the farming systems. But this will be strongly resisted by a powerful cartel of politicians, bureaucrats, agricultural scientists, and economists who will call for business as usual. Unless the government breaks through that cordon, Punjab will continue to suffer.