THE recent acceptance of the recommendation of the Committee of Parliament on Official Languages that speeches are only to be delivered in Hindi by government functionaries, including the President, if they can read and speak the language is a curious decision. 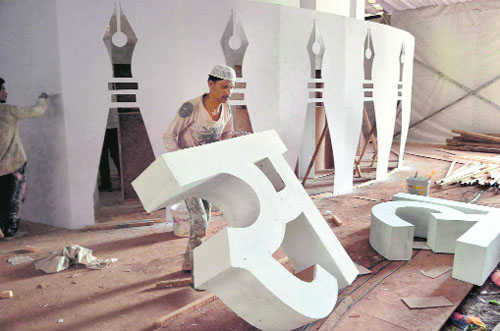 THE recent acceptance of the recommendation of the Committee of Parliament on Official Languages that speeches are only to be delivered in Hindi by government functionaries, including the President, if they can read and speak the language is a curious decision. Besides reopening the language debate, it also raises questions of practicality. One wonders what the President will do in Tamil Nadu or Nagaland where most people don’t speak or understand Hindi. Will he insist on following the letter of the law by speaking in Hindi or will he speak in English so that he can be understood? Also, does the Constitution not mandate that English is also an ‘official language’ of the Union, making this recommendation unconstitutional?

Then, there is another matter. What sort of Hindi will government functionaries speak? Will they speak the hybrid Hindi (with generous Urdu borrowings) that has been popularised by Bollywood films or will they speak the Sanskritised Hindi that the Hindu right prefers?

German-American sociolinguist JJ Gumperz, doing his field work in UP in the fifties, came across a curious phenomenon. He was in the habit of riding his bicycle in and around the villages and talking to people. At one spot, he would be complimented by a Hindu family for his mastery of Hindi. A few hundred yards away, a Muslim family would compliment him on the excellence of his Urdu. Gumperz states that in both places he was speaking the same thing!

What is today referred to as Hindi and spoken in many parts of the country is more or less the same as Urdu, Pakistan’s national language. The scripts are, of course, different, but the spoken language is similar. When one sees that Hindi films are extremely popular in Pakistan and Pakistani TV serials are very popular in India, it should be apparent that the line that separates ‘Hindi’ and ‘Urdu’ is so thin as to be non-existent.

Sanskritised Hindi is also present in India. It is found in government documents and the misguided missives of the Hindu right that is currently at the helm of affairs. It is not the language of the people and few can claim to understand its peculiar turns of phrase. Now, the stage has been set for this Sanskritised Hindi to receive the full backing of the government to try and displace spoken Hindi (as it now exists) and also reduce tongues like Punjabi, Tamil, Bengali and others to second-class status. Equally, it might sound the death-knell of English, a source of competitive advantage for India in international commerce. This move is being justified in the name of ‘nationalism’.

That the Hindu right has for long been enamoured of the European ‘one nation, one language, one religion’ mantra that saw the creation of Germany and Italy as unified entities in the 19th century is well-known. The ‘one religion’ project has been their obsession for a hundred years or more. The ‘one language’ slogan i.e., Sanskritised Hindi is the new project on the anvil. If this were to succeed, it would be a dream come true for them — their ‘Hindi, Hindu, Hindustan’ project would have been accomplished.

Around the time of Independence and for the decade after, ‘Hindiwallahs’ of the Congress attempted to enshrine Hindi as the ‘national’ language. Resistance from non-Hindi speakers put paid to these efforts. The creation of linguistic states in the fifties, the language riots of the sixties and the sobering influence of the breakup of Pakistan on the language issue in the early seventies ensured that the Hindi project remained dormant for a long time. Now it has been revived, buoyed, no doubt, by the sweeping success that the ruling party has enjoyed in recent elections.

To insist on a prime position for Hindi in the national discourse is to by default devalue the other languages of India and cause untold harm to the harmony that, to a great extent, has held India together. It is also to do a disservice to the Hindi language itself.

Hindi as a language is subject to peculiar pressures. It is propped up as the vehicle of nationalism, a Sanskritic vocabulary has been artificially appended to it, attempts have been made to purge it of its Arabo-Persian words and now, yet again, it is being rammed down the throats of those who are happy to learn the language, but dislike the chauvinism that has come to be associated with it. A language that is subject to such demands cannot but become a symbol of hatred. Its organic growth and natural popularity is bound to be affected. Eventually, the ill-will towards Hindi will transform itself in many parts of the country to separatist tendencies.

During the freedom struggle, the need to create linguistic states after Independence was a matter that many minds agreed on. Post the trauma of 1947, the ruling dispensation did a rethink. It dithered on this crucial matter. It suspected that linguistic division would breed separatist tendencies. Potti Sriramulu then went on an indefinite fast for a Telugu-speaking state. In Bombay, pitched battles were fought for the establishment of Maharashtra and Gujarat. Punjabi-speaking Punjab too was denied for a long time. The Congress government at the helm then had to eventually concede all of these demands. In time, it wisened up and dropped its insistence on prickly language issues. It saw the wisdom in being more broad-minded in this matter.

A nationalism that does not follow the European model of one language and religion now exists in India. Prior to Independence, opposition to the British had united the Indians. Post-Independence, Indians have remained united in spite of doomsday predictions by Western experts. True, this nationalism is a problematic one as Kashmiris and people from the North-East would argue, but nevertheless, it exists in the hearts and minds of a substantial part of the population. It is not posited on either language or religion. Instead, people have found a variety of creative ways to being and feeling ‘Indian’.

Why would a sensible mind upset this applecart? Clearly, no thought has gone into this matter. It is as if the ruling dispensation is armed with a checklist of things to do and is hell-bent on ticking all these boxes without stopping to think about them. Sanskritised Hindi is the current obsession.

The language battles of yore are still remembered by many. Insistence on Hindi being the sole official language is a misguided step that must be resisted at all costs. The idea of India was, and should, remain inclusive.

The writer, an editor with a publishing firm, is a freelance writer