BATHINDA: In the past few years, officials have spent crores of rupees to streamline the issues of sewerage and waterlogging in the city. 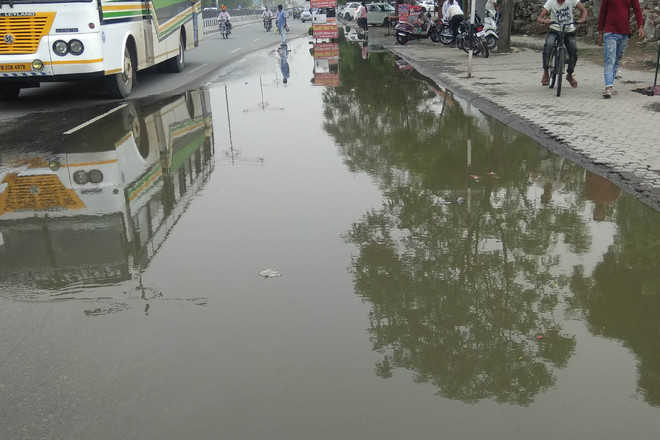 Water accumulates on the GT Road due to a blocked sewerage in Bathinda. Pawan Sharma

In the past few years, officials have spent crores of rupees to streamline the issues of sewerage and waterlogging in the city. But, residents have not got any respite.

Moreover, efforts have not been made to find out why the civic body has failed to resolve these issues so far. Monsoon has arrived, but sewerage in many areas is still lying choked. Besides, the complaint redressal system has been collapsed in the city.

Earlier, the Punjab Water Supply and Sewerage Board used to look after the sewerage system in the city. But for the past few years, it has been looked after by a private company, Triveni. Since then, the system has been crumbling.

The open drain from the railway underbrigade on the railway station road to the Sanjay Nagar pond has been lying blocked due to slime, which also exposed the negligence of MC officials. A Congress leader had alleged that bills of cleaning the drain had also been cleared by MC officials in the past.

Before the Assembly election, the Congress had claimed that it would terminate the contract of Triveni, which had been given Rs288-crore project of sewerage and water supply in the city. Despite the project dateline got over, the company has neither given extension nor it is been told to stop its work.

Councillors across the party lines alleged that sewer lines were lying choked and no system seemed to be in place for regular cleaning of choked or overflowing sewers.

Open drains and road gullies are yet to be cleaned, making major parts of city are prone to waterlogging.

Raj Kumar, Independent councillor from Ward No. 27 said, “The condition of sewerage in my area is such that if it rains at night, water will enter the houses of residents in Mata Raniwali Gali. I have been continuously taking up the issue with the officials concerned, but to no avail. Both Congress and SAD remain involved in mudslinging. Both of the parties have not done anything to provide relief to the public.”

Sukhdev Singh Brar, councillor from Ward No. 5, said, “Blockage of sewerage in my area is a major problem as sewer pipes were laid 15 years ago. Moreover, desilting has not been carried out, leading to a blockage and dirty water accumulates on roads. We have been facing the issue for the past two years, but nobody has done anything to resolve the problem.”

Senior Deputy Mayor Tarsem Goyal said, “Waterlogging is not an issue which cannot be resolved. There are six to seven chronic points in the city and we can tackle them separately. There are a lot of alternatives even a rainwater line can be laid, which can go into sewer disposal.”