DEFENCE budgets are opportunities for discussing and suggesting alternatives to overcome the resource constraints. But most reactions to this year''s defence budget have not gone beyond usual discordant notes of disappointment, dissatisfaction and the so-called ill effects on the services’ modernisation programme. 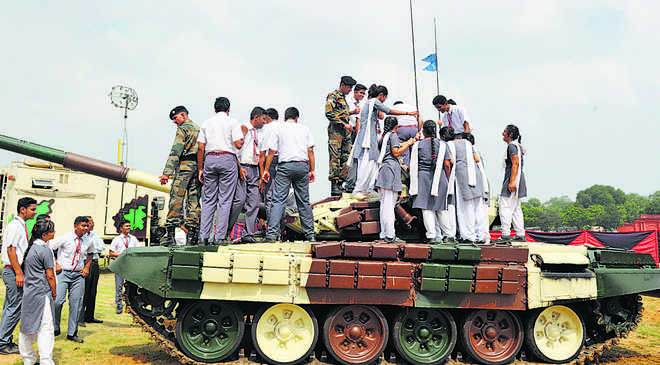 NEEDED: A reduction in defence manpower would help in saving the precious penny.

DEFENCE budgets are opportunities for discussing and suggesting alternatives to overcome the resource constraints. But most reactions to this year's defence budget have not gone beyond usual discordant notes of disappointment, dissatisfaction and the so-called ill effects on the services’ modernisation programme. Fulcrums of opinion, however, miss out that the defence budget, pegged at 2 per cent of the GDP, is in sync with progressive trends in defence economics. The real challenge is to discuss those core economic reforms in the defence sector that would facilitate optimisation of the official budget along with revenue supplementation.

Nearly all reactions to the defence budget boil down to one thing: shortage of funds for buying new weaponry. Given the fund commitments and outstanding liabilities, we may have to stagger some procurement payments for subsequent financial years. While the protagonists of the ‘more and more’ school are aware about the difficulties in a liberal dose of the budget to the defence sector at the cost of other sectors, they do not want to introspect and check if they can suggest the resources inhouse. Such resource perspective arises out of their philosophical determinism that military prowess is the dominant ‘token of power’ in international relations. They love talking about a security analysis framework in which the entire discourse revolves around the military sector; often quite ignorant and dismissive of other sectors that are equally important for our comprehensive security.

However, military power is no more the dominant currency in contemporary international relations. Inter-state wars, including great power wars, have drastically come down. The hollowness of power and security provided by military power stands thoroughly exposed. The fad for maintaining larger armies has come down and most great powers have drastically reduced their armed forces' numbers. Concurrently, economic dimension of power, along with other dimensions, has gained prominence. Geo-economic tools have emerged as the dominant mode of inter-state coercion, bargaining, coalitions and negotiated agreements.

Conservative scholars also blissfully remain victims of the ‘efficient war hypothesis’ in their military paradigm discourses and always blame shortages of budgetary resources for capability gaps. Their framework of analysis has only one benchmark — how other countries are spending. Authoritarian set-ups like China and Pakistan are role models for ideal defence expenditure as a percentage of GDP. Little credence is given to the fact that there is internationally no determined benchmark for defence expenditure as a percentage of GDP. At times, obsession with percentage figures looks rather insensitive since the relative backwardness of social sectors is blissfully ignored. Merely raking up the proportion of GDP may not secure us since within the military paradigm, budgetary resources are not the only determinant; rather, just a cog in the wheel. Other components like force profile, strategic culture and civil-military equilibrium also play pivotal roles in engendering military efficacy.

It, therefore, emerges that military power is a socially constructed reality where defence budget plays a peripheral role, but does entail a heavy burden on society. For example, our capital outlay for defence (2019-20) is one-third of the total capital expenditure of the Central Government. Putting a premium on it amounts to succumbing to pressures of the ‘more and more’ school since there can never be answers to the classic question — ‘how much is enough?’ Even at this rate, the defence budget would become unsustainable in five to six years due to galloping revenue and defence pensions expenditure, which unless tamed in the right proportion through policy interventions, would derail fiscal deficit efforts.

We should, therefore, talk about representative areas of internal reforms in defence. First, the revenue expenditure should be brought within sustainable limits. The salary bill is the largest culprit. So why not rethink our authorisation of manpower where instead of seeking more and more officers and men, as has been the practice, we rework them. If China can bring down its manpower from 4.9 million to 1.7 million within a span of three decades and augment its combat capabilities in the process, we can equally replicate the model. Even a 25 per cent reduction in manpower would go a long way in saving the precious penny.

Second, we should also reform defence pensions expenditure since very soon it will account for the entire kitty of the Central Government pension liabilities. It is debatable if the New Pension Scheme (NPS) would be attractive enough for talented and committed youngsters to join the armed forces. Perhaps, the solution lies in making the short-term services more attractive, like the US where 80 per cent of service members depart before serving 20 years. Under a new US scheme introduced in 2017, servicemen who go out before 20 years of service get a golden handshake under the Blended Retirement Scheme (BRS) without binding the government towards a long-term fiscal commitment. The BRS has become quite popular with more than four lakh enlistments by December 2018 and the same can be considered for the Indian situation. The long-standing proposal of lateral transfers to paramilitary services (and, perhaps, state police) with pro-rata pension could also be one option since every year, we lose a large group of best trained, disciplined and physically fit soldiers to the veterans category.

Third, we need to work out a revenue generation model without affecting the combat-preparedness of the armed forces. Many great powers in the past and present have resorted to this and there is no reason why we should not do this. There are many areas that have huge potential for revenue generation and we must not let go of the opportunity.

Unlike other sectors of the economy, the defence world is relatively closed. Outside experts, including most strategic experts, do not have a ground exposure of the defence world or the latent resources therein that are waiting to be tapped. Therefore, the reform initiative has to come from within the armed forces. Probably, there lies a solution to many of our woes related to the defence budget.