SHIMLA: “Shimla will not become another Cape Town” as it has capacity to reinvent and resolve water crisis, says Sunita Narain, noted environmentalist and Director General, Centre for Science and Environment (CSE). 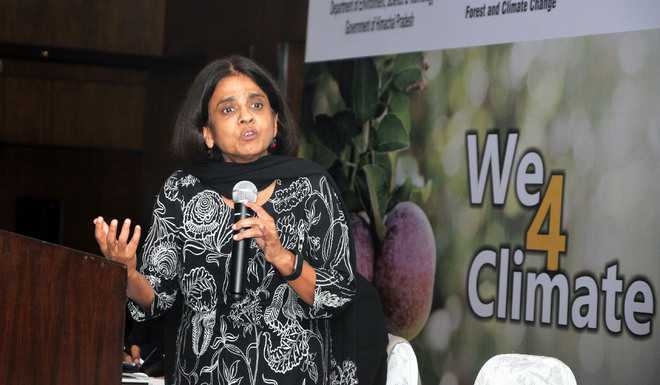 “Shimla will not become another Cape Town” as it has capacity to reinvent and resolve water crisis, says Sunita Narain, noted environmentalist and Director General, Centre for Science and Environment (CSE).

Kick-starting the lecture series “We 4 climate” on climate change here on Wednesday, she said “Shimla did face acute water crisis for a short duration this summer, but I am happy that the catchment area of Shimla is preserved. There is need for more such areas as trees and not schemes would meet the water needs of the town.” Water harvesting and recycling of water can go a long way in meeting the water shortage during summers, she added.

Capital intensive water supply and sewage schemes would not help ease the situation as neither the municipal bodies nor the people can afford it. As such every drop of water discharged should be recycled and used for agriculture and drinking purposes and no solid waste goes into rivers, she added.

She said climate change was a global problem and could be solved only if all the nations “work and act together” and take steps to reduce carbon emission. She stressed that “right policies are required or affordable, inclusive and sustainable growth as causing pollution and later clearing is an expensive proposition”.Arguing that “Climate change is not about future but it is about today as India has already started experiencing extreme weather conditions with increase in frequency of dust storms and several places expressing excessive rains in short duration”, Sunita Narain pointed out that about 500 people died in 50 dust storms from April to mid-June this year as western disturbances were changing course and becoming more erratic and unstable.

She said western disturbances experienced from December to February were now stretching up to June.

Kartikeya V Sarabhai, Director, Centre for Environmental Education, called for striking a balance between consumption and need and said there was no harm in adopting the latest technology but it should be modified as per our needs.