LUDHIANA: A free artificial limbs distribution camp was held at Viklang Sahayata and Punarvas Kendra, today, where around 31 persons were given artificial limbs, calipers, tricycle and hearing aids. 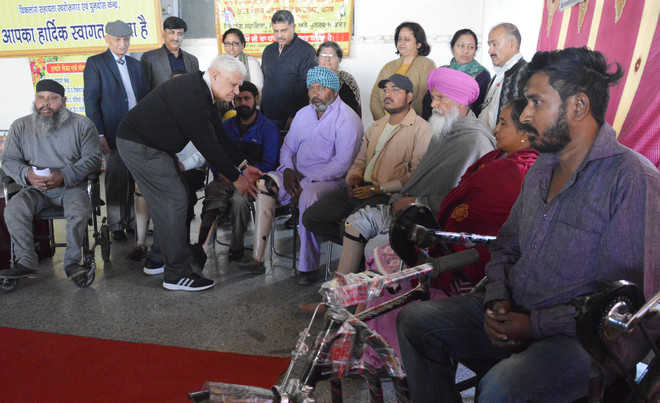 Free artificial limbs being distributed at a camp organised in Ludhiana on Sunday. Photo: Inderjeet Verma

A free artificial limbs distribution camp was held at Viklang Sahayata and Punarvas Kendra, today, where around 31 persons were given artificial limbs, calipers, tricycle and hearing aids.

RL Gupta, Dr Rajiv Gupta and Rajesh Mahajan were the chief guests on the occasion.

Narinder Mittal, Secretary, Trust, said the Trust had organised 1,130 camps since 1996, in which artificial limbs, calipers, crutches, tricycle and hearing aids have been provided to more than 48,186 physically challenged persons.

The Trust has also organised polio surgery camps, in which 2,371 polio operations have been done successfully, he said.