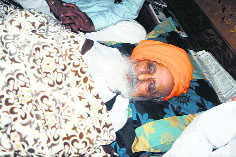 The 82-year-old activist, who is without food since January 16, refused a cardiologist from the Civil Hospital to conduct his medical check-up.

The police today withdrew its personnel deputed around Khalsa’s house. Sources said the situation was tense in Hassanpur village as 13 members of the Satkar Committee, including its chief Sukhjit Singh Khosa, who were held during the July 21 police raid, were released last night.

The sudden release of Khalsa from hospital has raised many an eyebrows. Khalsa’s family believes that it was a political decision.

Khalsa’s son Ravinderpal Singh Goggi said doctors did not give any hint of discharging his father. “It was at around 10pm yesterday that they came with a discharge slip and told us to take him (Khalsa) home,” said Goggi.

Commissioner of Police Pramod Ban said the decision was taken in public interest. The sources said at least 200 supporters of Khalsa were planning to protest outside the hospital. The doctors had met the senior police officials and expressed their concern over the continuous agitation outside the hospital due to which the patients were a harassed lot.