HISAR: BJP candidate Brijendra Singh submitted his nomination papers in Hisar on Saturday. Son of Union Minister Birender Singh, he had entered the poll fray after taking voluntary retirement from the civil services after BJP nomination. 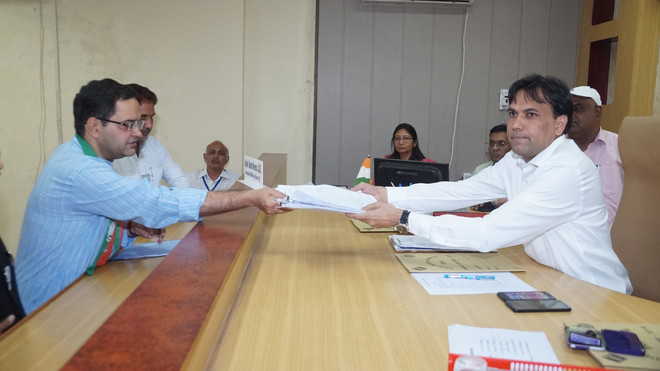 BJP candidate Brijendra Singh submitted his nomination papers in Hisar on Saturday. Son of Union Minister Birender Singh, he had entered the poll fray after taking voluntary retirement from the civil services after BJP nomination.

Brijendra stated that he left his job as he would get a better opportunity to serve people on a political platform. Jain said the BJP was clear on issues like security of the country’s borders, eradication of poverty and elimination of terrorism, casteism and nepotism.

Taking a dig at the Congress, Jain said the Congress had not announce all 10 candidates from the state because no one was ready to contest on its ticket. “There seems to be an atmosphere of chaos and uncertainty in the grand old party,” he commented.

He said Rahul Gandhi had again given the ‘Garibi Hatao’ slogan for the elections. Congress Prime Ministers had ended their five-year terms in formulating schemes for removal of poverty, but there was no concrete programme for implementation on the ground level, he alleged.