JAMMU/KATHUA: Heavy rainfall on Saturday disrupted life across the Jammu region, causing damage to several houses and roads besides affecting traffic on the Jammu-Srinagar national highway for several hours. 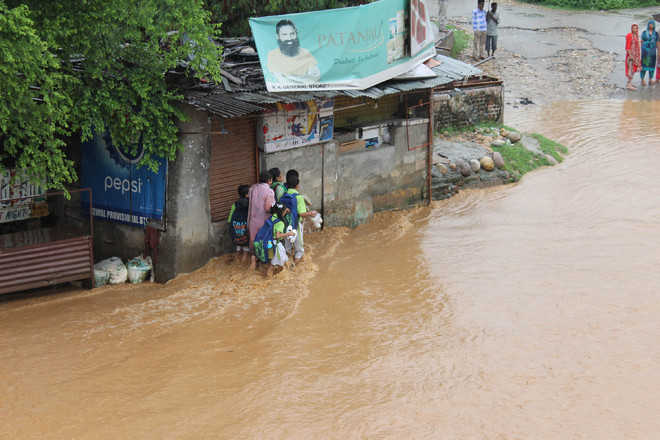 People try to cross a waterlogged road in Jammu.

Heavy rainfall on Saturday disrupted life across the Jammu region, causing damage to several houses and roads besides affecting traffic on the Jammu-Srinagar national highway for several hours.

According to official reports, overnight rainfall brought normal life to a complete halt in Kathua, Reasi and Udhampur districts.

In Kathua, landslides shut many roads while several nomadic families got trapped in flash floods. Several areas were waterlogged, causing losses to household items and shops in the main Kathua market.

According to reports, the link road connecting the upcoming Kathua Medical College with the national highway got washed away due to flash floods in a rivulet while a bus ferrying passengers also got trapped along the Jammu-Pathankot national highway near the Hatli Morh area due to waterlogging. All passengers were, however, safely evacuated.

Meanwhile, the rainfall also caused floods in Ujh river, causing losses to crops in the lower Rajbagh area. Fourteen nomadic families, which got trapped in the flash floods in the Ujh near the Rajbagh and Pandori areas, were evacuated by the police along with the help of a team of the State Disaster Response Fund (SDRF).

In the main Kathua town, the flood water entered many shops and houses in low-lying areas such as Krishna Nagar, Ward Number 7 and 8 and parts of the main bazaar, causing losses.

Meanwhile, the landslides on the Bani-Basohli and Dhar roads on the Punjab side also led to the blocking of the traffic movement.

Meanwhile, Reasi DC Indu Kanwal Chib said several roads and houses had suffered damage due to the overnight rainfall. “Many cattle have died in house collapse incidents. We are assessing the losses,” she said.

Sources said a border outpost along the International Border in the Samba sector had also suffered minor damage due to flash flood in a rivulet.