SHIMLA: Monetary benefits, concessions, subsidies, soft loans, jobs and regularisation have been promised by the Congress to one and all in its 31-page manifesto released by the top brass of the party here today. 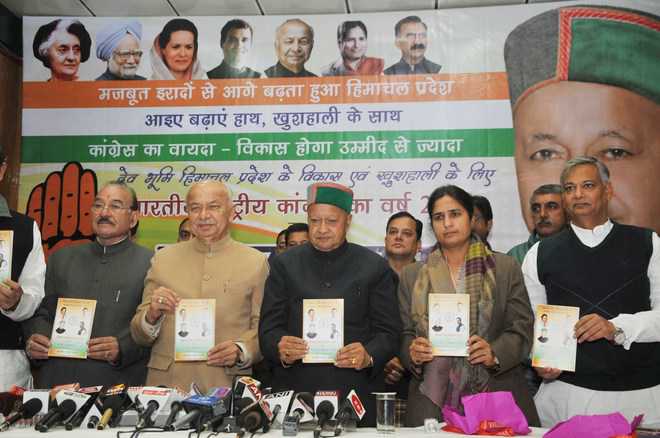 Monetary benefits, concessions, subsidies, soft loans, jobs and regularisation have been promised by the Congress to one and all in its 31-page manifesto released by the top brass of the party here today.

“It is a very well-prepared document which will become a benchmark of progress for all times to come and we will adopt it as a policy document after returning to power,” said Chief Minister Virbhadra Singh. He added that the projection of PK Dhumal as the BJP’s CM candidate would only better Congress chances.

Releasing the document highlighting 27 sectors, Health Minister Kaul Singh Thakur, Chairman of the Election Manifesto Committee, said the Congress government had fulfilled 95 per cent of the promises it made in the 2012 manifesto. AICC secretary Sushil Kumar Shinde said the Congress would return to power on the unprecedented development undertaken by the Virbhadra regime which was possible only in 10 years.

With 23 per cent (1.78 lakh) of the electorate being in the 18 to 30 years of age group, wooing this chunk is the key to victory for any party. The Congress has promised to create 1.50 lakh jobs, enhance Unemployment Allowance from Rs 1,000 to Rs 1,500 and from Rs 1,500 to Rs 2,000 for the disabled. The party has promised to formulate a policy on creating the maximum jobs in the private sector with financial benefits on a par with the government sector. Mini stadia at all district headquarters, libraries, gyms and playgrounds in all panchayats and sports kits to all youth clubs are some other promises.

Acknowledging the influence that the babus have in Himachal politics and their demand for 4-9-14 scale, the manifesto promises regularisation of contractual employees in two years, daily wagers and outsource employees in three years and enhancement of daily wages from Rs 210 to Rs 350 and regularisation of Para, PAT and computer teachers. Pensioners too have been taken care of as their demands for enhancement in financial benefit, setting up of age-old homes in all district headquarters, free medical care, social security pension to all between 60 and 75 years and Rs 1,500 to all elderly above 75 years will be accepted.

Small and marginal farmers will be given interest-free loan up to Rs 1 lakh, besides 90 per cent subsidy on rainwater harvesting, anti-hail nets, insecticides, pesticides and farm fencing against stray animals. An agriculture and horticulture commission has been promised with thrust on organic farming, tea cultivation, sericulture, rejuvenation of all fruit farms, organic farming and animal husbandry.

The promise to open working women hostels, crèches, Mahila Mandal Bhawan, Industrial Training Institutes (ITI) for women and Rs 1 lakh grant for marriage of daughters of widows has been made. As a means to provide safe and secure environment, women police stations and a toll-free mobile app number for registering crime against women will be available soon.

It promises thrust on eco-tourism with special modules to impart training to the youth in tourism skills, heli-taxi services, more concessions under home stay scheme, setting up of ropeways and expansion of existing airports. Subsidy on loans to youths for purchasing taxis and setting up less than 10-room hotels will be provided.

It will ensure pension to all workers in the unorganised sector, minimum daily wages of Rs 350, maximum jobs to Himachalis in the industry, revival of sick units and an amended power policy. A share and jobs for power project-affected families, expediting completion of underway hydro-power projects, grant of factor two in awarding land compensation in fourlaning and road projects are also on the agenda.

Free treatment and medicines to all in government hospitals, 25 per cent increase in the cadre of doctors and paramedical staff, heli-ambulance service and telemedicine projects for tribal and remote areas.

Annual income eligibility for all welfare schemes raised from Rs 35,000 to Rs 60,000. Enhancement in emoluments of Anganwadi workers and Asha workers in the Health Department proposed besides schemes for OBCs, Gaddis, Scheduled Caste (SC) and Scheduled Tribe (ST).