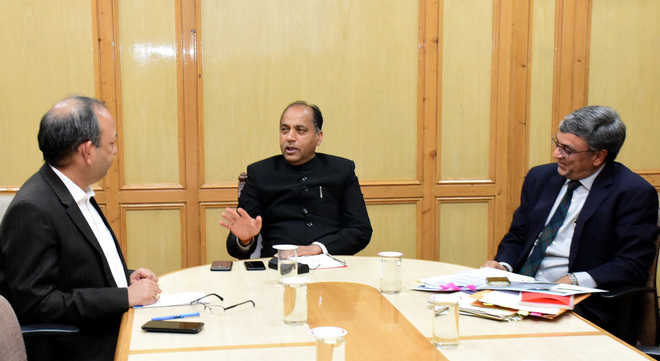 CM Jai Ram Thakur at a meeting of the Tourism and Civil Aviation Department in Shimla on Tuesday.

This was stated by Chief Minister Jai Ram Thakur at the review meeting of the Tourism and Civil Aviation Department here on Tuesday. “The inclusion of these towns under Udaan-II will go a long way in promoting high-end tourism in these areas,” he said. The flights will begin once the required infrastructure is created to attract high-end tourists.

Thakur said the state had several manmade reservoirs such as Chamera, Pong Dam, Gobind Sagar, Tattapani, Larji and Pandoh, having potential for water sports. These lakes would be developed for water sports, shikara, boating, house boat, sea plane and other recreational activities, he added. The state government would take up the matter for allowing water sports and recreational activities in the Pandoh dam with the BBMB so that it could be developed from the tourism point of view. He said the Larji dam would also be developed as a tourist attraction by creating necessary infrastructure to facilitate the tourists.

The Chief Minister said a sum of Rs 480 crore would be spent on the development of infrastructure in unexplored and lesser-known tourist places of the state under the Asian Development Bank (ADB) tranche-II project worth Rs 1892.04 crore.

A sum of Rs 180 crore would be spent on the beautification of towns like Nahan, Solan, Palampur, Dalhousie, Una, Keylong, Tabo and Kaza. Under the project, about Rs 45 crore would be spent on conservation and maintenance of heritage buildings and Rs 50 crore on capacity building. “Under the new scheme “Nai Raahein-Nai Manjilen” for developing new destinations, the state government has selected Janjehli in Mandi district, Chanshal in Shimla district, Bir Billing in Kangra district and Larji in Mandi,” he said.

“The government is committed to establishing ropeways for the convenience of tourists,” he remarked.

The CM said construction had been expedited on the Rs 150-crore Dharamsala-McLeodganj ropeway which would be completed by May next year. Additional Chief Secretary, Tourism, Ram Subhag Singh said the Tourism Department would ensure that all lesser-known destinations were brought on the tourism map.