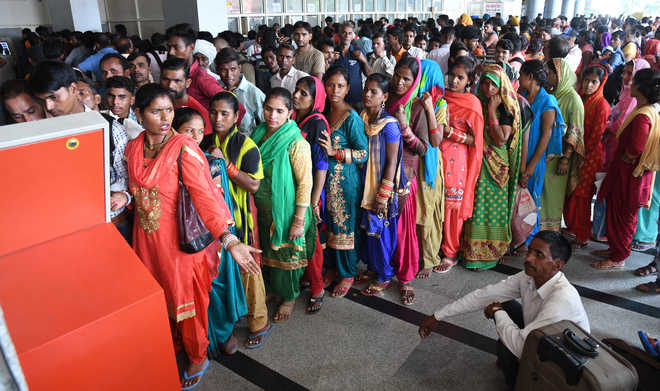 Passengers wait for their turn to buy tickets at the railway station in Chandigarh on Tuesday. Tribune Photo: Ravi Kumar

“This is holiday rush. We have enough trains to cater to everyone,” said Additional Divisional Railway Manager (ADRM) Karan Singh.

However, people at the station complained of chaos and were seen asking the Railway Police to ensure travellers remained orderly and stuck to their queues.

Travellers had to stand in queue at ticket counters for up to two hours.

“I have been queued up for the past two hours and haven’t been able to purchase ticket yet,’’ said Sonia, who wanted to travel to Saharanpur to be with her family on Raksha Bandhan.

Long queues, with a waiting time of at least 30 minutes, were also witnessed at the automatic ticket vending machine kiosks —which were installed to reduce the waiting time at ticket counters.