SRINAGAR: A day after municipal polling in Jammu and Kashmir, a policeman and three Hizb-ul-Mujahedeen militants were killed in a gunfight in old city area of Srinagar on Wednesday. 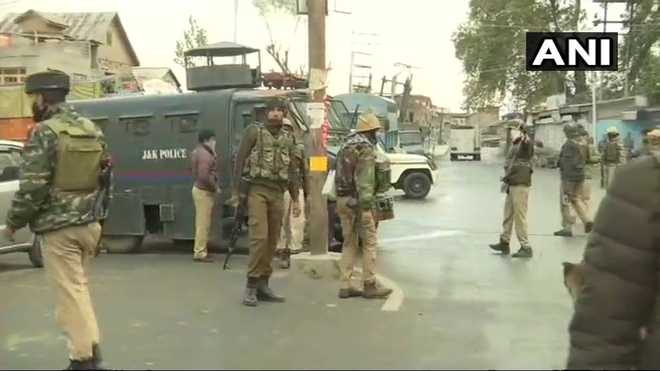 The operation is still under way. ANI

A day after municipal polling in Jammu and Kashmir, a policeman and three Hizb-ul-Mujahedeen militants were killed in a gunfight in old city area of Srinagar on Wednesday.

The policeman killed was identified as Kamal belonging to Reasi district of Jammu region.

Security forces in the wee hours of Wednesday launched a cordon and search operation on the specific information of presence of militants in a residential house at Fateh Kadal locality.

"Three militants have been killed on Wednesday morning at Fateh Kadal locality. We are yet to retrieve the three bodies," Additional Director-General of Police, Law and Order Muneer Khan told The Tribune.

He said police had inputs about the presence of Hizb militants in the residential house. "Once the bodies are retrieved, we can ascertain the identity of the militants and their organisation," he said.

He said the operation is on while the firing has stopped.

The killing of three militants could lead to the wiping out of Hizb from the summer capital Srinagar.

The Srinagar went to polls on Tuesday and recorded a voter turnout of 4 per cent. Sources said the Hizb group was under sercurity radar for past two weeks but officials waited till the elections are over.

The government has ordered closure of all educational institutions, including schools, and Internet services have been suspended.