Play my Croatia, when I see you my heart is on fire. 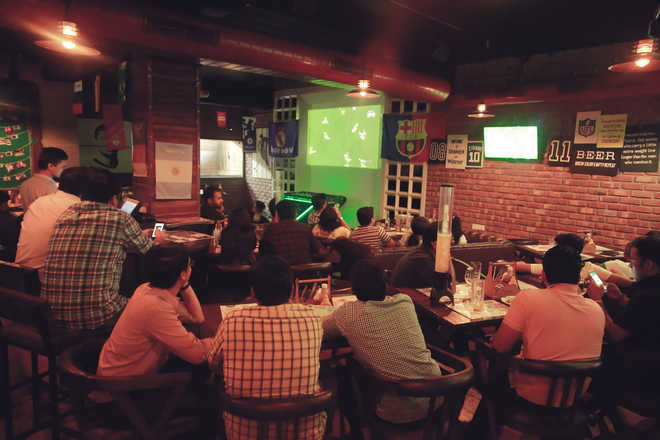 Play my Croatia, when I see you my heart is on fire... isn’t the sentiment only playing on the minds of Croatian population; it’s the theme song for half of our city too!

As favourites France and surprise package Croatia get set to clash in the finals, and Belgium ready to fight it out with England for the third spot, fans in tricity are all-agog! Although Germany, Argentina, Brazil and Portugal fans have had to face a disappointment, but they have sooner than later chosen among the two nations set to clash in the final now – the second smallest nation to make it to the World Cup final, Croatia (after Uruguay), and Didier Deschamps’ highly effective French team.  Semi-finals saw Mario Mandzukic, Ivan Perisic, Samuel Umtiti and Kylian Mbappé cement their place in the hearts of football lovers. And as the weekend approaches, the mood sure is sporty. So, the restaurants are decked-up to welcome fans!

Both the screens at Flyp are set; says Vikas Sherawat, “People are crazy for FIFA and the atmosphere is fantastic as the fans cheer their favourites.” Newly opened Playground-26 aims to make the most of the weekend by ensuring that the patrons enjoy the game to the fullest. It’s the bonding with people that brings Pranav Gupta to these people. “I have made so many new friends while bonding over football; it’s always way more fun cheering your team with friends,” he says.

Adds Gurasees Singh from Xtreme Sports Bar & Grill, “With 22 screens and projectors, we take pride in hosting the sports buffs. Having had a crazy season through the world cup, XSBG is gearing up for the FIFA world cup final with extra projector screens on the floors and early bird offers, and special hand-crafted cocktails to beat the summer heat.” Well, they also have on offer lunch for just Rs 249 till 4 pm, if you feel like catching the highlights of the entire season.

Peddlers, at both its outlets, is set to make its customers enjoy to the hilt. This weekend you can club their summer offer with the game at Rs 1,199 per head with IMFL drinks, domestic beer and snacks. At Kitty Ko, Lalit Chandigarh, a forest-facing lounge is set to screen the matches. Screenings also take place at Kitty Su (in-house nightclub), in case weather plays spoilsport. ”We also have exclusive food and beverage offers,” says V Kumaran, F&B manager.

Well, enjoy the party till it lasts.

Will Smith to perform at closing ceremony

American actor and singer Will Smith is once again set to rock the stage of the ongoing 21st edition of the FIFA World Cup 2018, as he will perform at the closing ceremony of the showpiece event this Sunday. Smith, who also performed at the opening ceremony of the football tournament, will sing the official song, Live it Up, alongside American singer Nicky Jam and singer Era Istrefi. - ANI