LUDHIANA: The two-day match between Bathinda and Ludhiana in the ongoing Inter-District (U-16) Cricket Tournament played at GRD Academy on Hambran Road here today, ended in a draw. 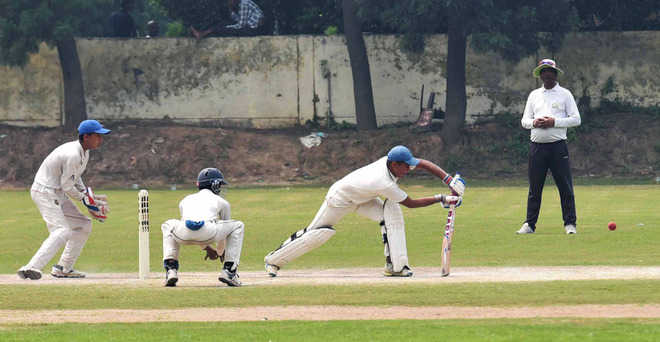 The match between Ludhiana and Bathinda under way on Friday. Photo: Inderjeet Verma

The two-day match between Bathinda and Ludhiana in the ongoing Inter-District (U-16) Cricket Tournament played at GRD Academy on Hambran Road here today, ended in a draw. However, the former were declared winners on the basis of the first innings lead.

Bathinda secured three points and Ludhiana got one point. The match was merely of academic interest as both teams have already qualified for the quarterfinals. In reply to Ludhiana’s first innings score of 176 all out, Bathinda today resumed their innings at 176 for 2 and were reduced to 245 all out in 75.1 overs.

The overnight not out batsmen, skipper Uday Partap (105) and Parv Malhotra (60) could not last for long and were out after contributing 123 and 70 runs, respectively.

Once they left, the visitors fell like pack of cards and their first essay culminated at 245 runs. For Ludhiana, Sidhant Tiwari captured five wickets for 61 runs.

Trailing by 69 runs, Ludhiana declared their second innings at 214 for three after 50.4 overs in which opener Saksham Vij remained unconquered on 108 runs while Aryanvir Singh remained unbeaten on 100 runs. — OC