CHANDIGARH: Three persons, including two youths travelling in an auto-rickshaw, were injured when a speeding car hit the auto and dragged it for around 100 metres at the Sector 17/18 light point on the intervening night of June 10 and 11. 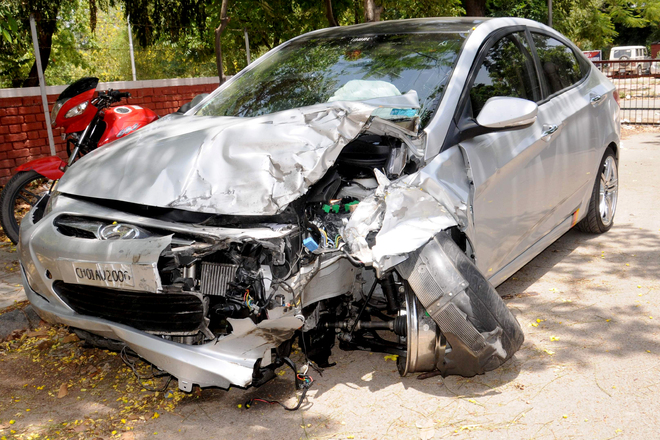 The Hyundai car that hit an auto-rickshaw at the Sector 17/18 light point on Wednesday night. Tribune photo: Manoj Mahajan

Three persons, including two youths travelling in an auto-rickshaw, were injured when a speeding car hit the auto and dragged it for around 100 metres at the Sector 17/18 light point on the intervening night of June 10 and 11.

According to the police, the auto-rickshaw was on its way to Sector 17 when the car, heading towards the Press light point, hit it at the light point.

Auto driver Rakesh Kumar, a resident of Khuda Alisher, and two youths, Arpit and Tarun, both residents of Sector 19, were injured in the accident. The occupants of the Hyundai car escaped unhurt.

Sources said all injured were rushed to Government Multi-Specialty Hospital (GMSH), Sector 16, from where Arpit was referred to the PGI. He suffered a head injury. Rakesh Kumar and Tarun were discharged after treatment.

The sources said the occupants of the car fled after the accident. While the auto-rickshaw was completely wrecked, the front portion of the car was damaged.

Tarun is an employee of a showroom at Elante Mall while Arpit, who hails from a village near Abohar, is planning to move abroad after clearing the International English Language Testing System (IELTS).

Police officials said both vehicles had been impounded and an investigation had been initiated. The sources said the police were yet to find out who was driving the car at the time of the accident.

A senior police official said he was unaware of the accident. The in charge of the police post had not informed any of the seniors, including the DSP and the SHO, about the accident.