Movie Review - Scary Stories To Tell In The Dark

Scary stories that fail to scare

Though India has a fairly well primed audience for horror movies, it’s not very clear whether horror anthologies in book form hold the same affection. So, the likelihood of an established fan base for this lacklustre adaptation of Alvin Schwartz’s popular folklore condensed into anthology series, with story and production credited to Guillermo Del Toro, is questionable. 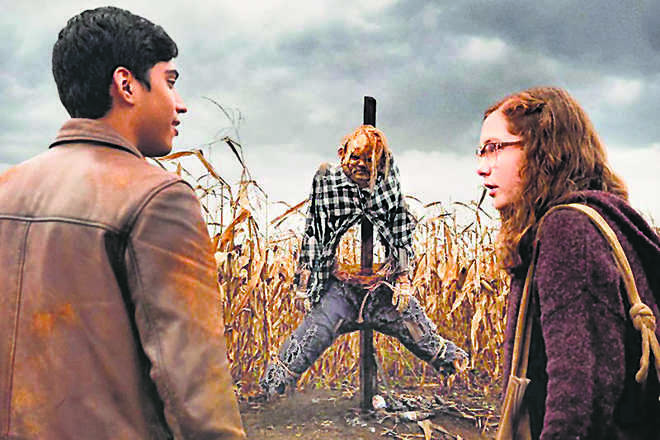 A still from Scary Stories To Tell In The Dark

Though India has a fairly well primed audience for horror movies, it’s not very clear whether horror anthologies in book form hold the same affection. So, the likelihood of an established fan base for this lacklustre adaptation of Alvin Schwartz’s popular folklore condensed into anthology series, with story and production credited to Guillermo Del Toro, is questionable. This, first of a possible three-part film series, is set in 1968 small town America (Mill Valley, Pennsylvania) at a time when criticism of the Vietnam imbroglio was at its peak and racism was far more rampant than it is today.

The film begins with teenagers dressing up for Halloween. We see a triumvirate - Stella (Zoe Colletti), Chuck (Austin Zajur), Auggie (Gabriel Rush), all dressed up for trick or treats, engage in a skirmish with school bully Tommy (Austin Abrams), escape into a drive-in playing The Night of the Living Dead, seeking refuge in Hispanic stranger Ramon’s (Michael Garza) car and then moving on to a haunted house in a game of dare devilry. Inside the house, they find mysteriously deceased Sarah Bellows’ diary – a portent for the evil to come!

There’s not much inventiveness here other than the bit about the prescient writing in blood of an imminent death. Del Toro’s influence can be seen in the creep influencing scene-setting, the material composition of ghosts and the facetious social commentary. The script by Dan Hageman and Kevin Hageman basically stitches together highlights of several of Schwartz’s most popular stories but the resultant is neither coherent nor convincing.

When Auggie’s sister sees her oversized painful pimple erupt into a nest of spiders, or when Harold finds himself turning into a scarecrow –it looks awful but doesn’t feel creepy at all. The build-up to those moments are just not effective. Those and several other elements intended to raise the scare quotient fail to affect. They all seem like the regular, standard, creep tricks generated through CGI.

By attempting to meld several stories together as one large framing device, Del Toro and the scriptwriters do a disservice to Schwartz’ insidious imaginings. And the rather woolly coherence of the narrative coupled with ineffective cinematography and undermining background score, fails to fire up the easily susceptible imagination of its intended young audience!