My childhood was offline. But my daughter’s childhood is online, dominated and driven by gadgets. Smartphone is her toy library. She browses, downloads and plays games on it, just by tapping her little fingers and peering on its monitor. 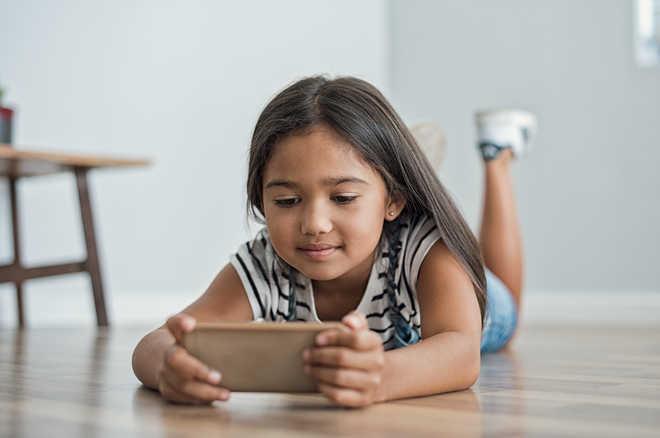 My childhood was offline. But my daughter’s childhood is online, dominated and driven by gadgets. Smartphone is her toy library. She browses, downloads and plays games on it, just by tapping her little fingers and peering on its monitor. The outdoor games that I used to play as a child seem to have been consumed by the Internet. Making paper boats in rain, flying kites from dawn to dusk and playing antakshri with friends were a few things that kept us engaged. Rain was then awaited and welcomed. Splashing rainwater on friends, jumping on puddles accumulated on roads gave pleasure which no treasure of earth could offer.

But these days, rain lashes on the monitor of a computer! And if it rains outside the screen, weak immunity pulls her back from taking a plunge into celebrations orchestrated by Mother Nature. Traditional games like stapu, pithu garam, chor-sipahi and a host of other fun-filled games have been lost in the sound and fury of Digital India and are no longer on the play menu of children, let alone be a part of their mental landscape.

My daughter’s best (worst) friend is YouTube. I had no such friends. I used to love and tease my friends. I would communicate and compliment them. But YouTube operates with a click. No emotional bond binds my daughter with her ‘best’ friend. I would, however, be emotionally attached to my friends, and still am in touch with them.

Unlike YouTube, we operate with a friendly touch. We still recognise the beat of one another’s heart; still make efforts to understand feelings and work with zeal to further cement our ties. Even today, we do not flinch from extending a helping hand to one another. The seeds of this unbreakable bond were sown in childhood days. But my daughter travels in the desert of friendship. Who will offer her drops of water of love and strength when she needs them the most? Online and YouTube friends certainly won’t.

My childhood friends are so powerful that they can still pull me out of the quagmire of depression if I ever slip into it. But she is unfortunate. Her e-friends PUBG, Pokemon, ABC jumpers et al. have already pushed many into the jaws of death and destruction. With friends turning foes, I have time-travelled her to my childhood days. Now, I play Ludo with her; her fingers flick the striker to send the red queen into the four corner pockets of the carrom board; and old comic books too have found a place in the shelf of the study to make Chacha Chaudhary and Sabu her best friends. I have hidden her smart gadgets. With the gadgets out of her sight, her lost childhood can be found.