AHMEDABAD: A Gujarat Police head constable was today killed in stone-throwing by a mob of Dalits protesting the recent flogging of four youths of the community in Una town of Gir-Somnath district by cow vigilantes for allegedly skinning a dead cow. 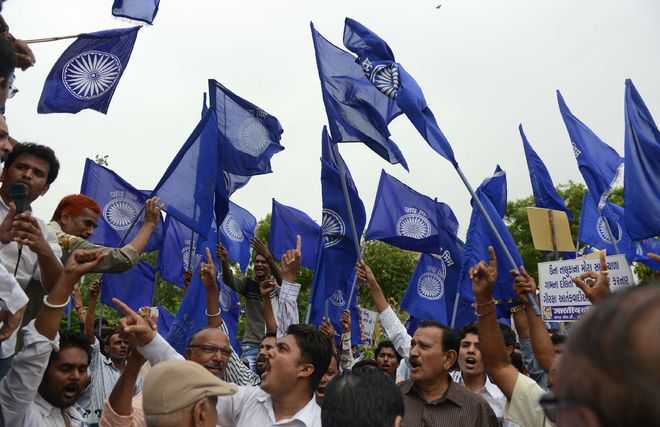 Gone astray: Activists of a Dalit group during a protest in Una town of Gujarat on Tuesday. AFP

A Gujarat Police head constable was today killed in stone-throwing by a mob of Dalits protesting the recent flogging of four youths of the community in Una town of Gir-Somnath district by cow vigilantes for allegedly skinning a dead cow.

Highways were blocked in several parts of Saurashtra and three state transport buses set afire as the Dalit agitation snowballed into a mob-police battle. The police fired in the air and lobbed teargas shells to disperse a mob indulging in stone-pelting at Rajkamal Chowk in Amreli town.

Six policemen were injured and rushed to a hospital in Rajkot where head constable Pankaj Amreliya, who was hit on the head, succumbed to his injuries, the police said. The Dalit unit in Junagadh has given a call for bandh tomorrow following the death of a youth who allegedly consumed poison.

About 500 protesters were arrested from different parts of Saurashtra for indulging in violence, arson, stone-pelting and vandalising buses.

Besides setting the buses afire, the Dalits vandalised a telephone exchange in Rajkot. An assistant locomotive driver received head injuries when a mob pelted the train with stones.

In Ahmedabad, the OBC Ekta Manch headed by Alpesh Thakore, who had led an agitation against reservation for Patels, organised a sit-in near the Dr Ambedkar statue in Sarangpur locality to condemn the alleged atrocities on Dalits.

Appeals by Chief Minister Anandiben Patel and other leaders have so far gone unheeded. The state BJP government has set up a special cell in the crime branch to investigate into the incident. Nine persons, including the local Shiv Sena leader, have been arrested and a relief of Rs1 lakh each has been announced for the four victims. A Congress delegation led by state unit president Bharatsinh Solanki submitted a memorandum to Governor OP Kohli listing the alleged incidents of Dalit atrocities in the state in the last 10 years.