NEW DELHI: The Delhi Commission for Women celebrated the valour, endurance and inspirational tales of people who have been markers of change in society. 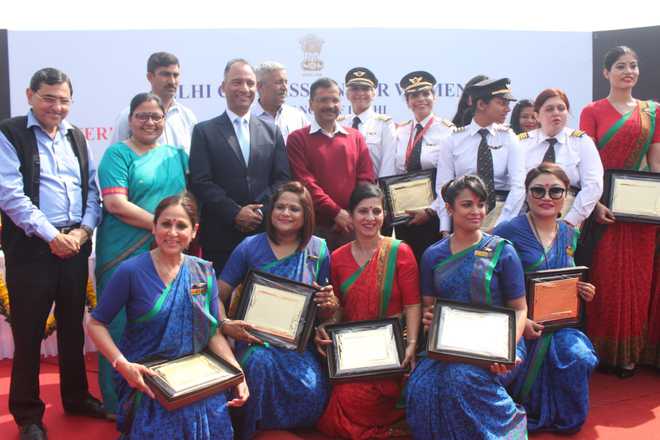 Arvind Kejriwal with those honoured on the occasion. Photo courtesy: DCW

Celebrating the valour, endurance and inspirational tales of people who have been markers of change in society and the cause of women, the Delhi Commission for Women (DCW) has recognised the contributions of 28 men, women and groups whose strength and compassion surpassed all odds that came in their way.

No barriers are enough to shatter the fortitude of these role models who were honoured by Delhi Chief Minister Arvind Kejriwal, minister Rajendra Pal Gautam and Chief Secretary Vijay Dev on International Women’s Day here at an event organised by DCW to mark the culmination of a 13-day march undertaken by its chairperson Swati Maliwal and her team to understand the problems faced by women and girls in the national capital.

A former beggar, Sindhutai Sakpal, who now takes care of 1,400 orphans and abandoned children; Dr Adarsh Sharma from Sonepat whose role in busting over 60 pre-natal gender screening rackets as head of District Pre-natal Diagnostic Techniques won him laurels, and Dinkar Nath Sharma (80) or ‘Medicine Baba’ who collects unused medicines in the city for the needy were felicitated for their social service.

Rajasthan’s Imarati Devi was honoured for making a well for people of the lower castes in her village and later forming a group called “Jal Saheli” and good Samaritan Dr RP Yadav, a retired CMO, who donated Rs 19 lakh from his provident fund to buy a bus for girls to go to college in the state was also awarded.

Also felicitated were some who defied stereotypes. Poonam started driving an e-rickshaw at the age of 54 to support her family while Areena Khan took up the job of a newspaper hawker for taking care of her family’s living after her father fell ill.

Jameeda Bibi is the first Muslim woman to lead Friday prayers in India in Kerala’s Malappuram district with 30 people. Joyita Mondal endured all gender barriers to become the first transgender judge of a Lok Adalat in West Bengal. While firsts of all-women crew of Air India, BSF bikers, Indian Navy crew (Navika Sagar Parikrama) that circumnavigated the globe in eight months and Army’s woman stunt rider Captain Shikha Surbhi were awarded for their feats. As was Taniya Saniyal for whom the Airport Authority of India had to alter its rules for employing her as its first female firefighter.

Those who were honoured posthumously were Pawan Shah who saved a drowning woman and her son who jumped into the river before his eyes, at the cost of his life, SI Narendra Kumar who lost his life while protecting a girl in a case of ‘honour’ killing and Fatima who lost her life while protecting her four children when their house in Ghaziabad caught fire.

Among the specially abled awardees were Ummul Kher who despite his congenital fragile bone disorder went on to become an IAS officer, hearing impaired international badminton player Sonu Anand Sharma and Aditi Verma though suffering from Down’s Syndrome didn’t let her limitations prevent her from being a self-reliant entrepreneur and is currently running her own cafe in Navi Mumbai.

The initiatives of Manju Chahar in rescuing a minor from a brothel, of Bimla Devi in handing over to the DCW while travelling from Etawah to Delhi a minor who had run away from her home in Bihar, of Neelam and Rita of Shahbad Dairy known for helping victims of rape, sexual assaults and kidnapping in voicing against their perpetrators and prompt efforts of police officers of Anti Human Trafficking Unit, Delhi Crime Branch, were recognised too.

The recipients include Akhilesh Sharma, a TTE with Indian Railways, for handing over a minor girl he found in the train to the child helpline, while Pooja Kumari prevented marriage of a minor by calling the women’s helpline and Ashok Gupta who was a street hawker and a father of three daughters, sold his house for treatment of one of his daughters who suffered from a face deformity.