No water treaty keeps Arunachal on edge : The Tribune India

As India and China race to tap — or literally dam — the 97,000-MW hydro-power potential of the Brahmaputra/Tsangpo river, the people of Arunachal Pradesh look askance. 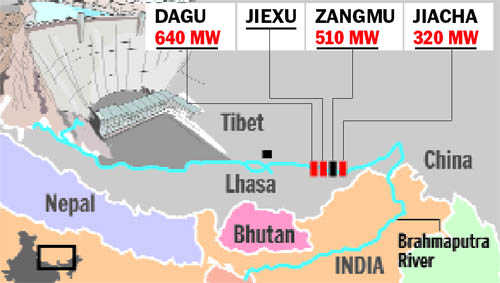 As India and China race to tap — or literally dam — the 97,000-MW hydro-power potential of the Brahmaputra/Tsangpo river, the people of Arunachal Pradesh look askance.

They have two issues. First, there is no water-sharing treaty between the two Asian neighbours divided by the Himalayas, allowing Beijing to hold the waters in its upcoming dams or release it suddenly. Second, the size of the under-construction dams on the Indian side, where the Himalayas are geologically unstable, needs to be reduced. Meaning, more smaller dams than a few huge ones.

The 2,900-km-long Brahmaputra river, known as Tsangpo in Tibet, originates at a 17,050 feet high glacier near the Kailash Mansarovar. It travels 1,100 km eastwards across the Tibetan plateau before taking a sharp southwards turn near the 25,547 feet high Nanjagbarwa Peak to enter Arunachal Pradesh for its destination into the Bay of Bengal. It carries more than 71 billion cubic metres of water annually, making it the third largest fresh water flow into the sea — after the Amazon and the Congo river.

On its side, China intends to build 40 dams on the river and its tributaries to generate 60,000 MW of power. Three such dams at Dagu, Jiacha and Jiexu are under construction and the fourth, Zangmu, was operationalised recently. All are located on the Tsangpo in the area north of Arunachal.

Ninong Ering, a Congress MP from Arunachal East, flagged the issue in the Lok Sabha on December 1. “We have no river water agreement with China. This will be very disastrous in the long run because there will be water scarcity not only in Arunachal Pradesh, but throughout the north-eastern region.” The government should discuss the water-sharing issues, he added. In the past, Beijing has shared flood-season data, but New Delhi does not have access to day-to-day or empirical hydrological data to which it is entitled, being a lower riparian state of the river.

On the Indian side, its Central Electricity Authority (CEA) in the plan period 2012-2017 says dams are being built in Arunachal to produce 9,579 MW of power. The same report assesses the long-term pre-feasibility hydro-power potential of the state at 27, 293 MW.

Former state Minister Naresh Glow, three-time MLA from Thrizino-Buragoan constituency and now a member of the BJP, says, “We want hydro power, but the planning should be to have smaller dams, which will keep the environment protected.”

Glow may not be off the mark. ‘Geological surprises’ – very soft earth or underground water channels — during construction cannot be completely ruled out. A 2,000-MW Subansiri Lower project in Arunachal Pradesh has been affected due to such a ‘geological surprise’, says a CEA report.

Militarily, some of the key installations are close to the rivers in Arunachal Pradesh. “In an earthquake, a big dam reservoir will be catastrophic,” Glow warned. In the past century, the Himalayas have been rocked by a few major earthquakes which were greater than 7 on the Richter scale – notably in Kangra, Uttarkashi, Sikkim and Nepal.

Meanwhile, in Guwahati, located on the Brahmaputra, the oil refinery was shut in the middle of December due to excess silt. Executive Director of the refinery J Borpujari was quoted in media: “Although silting and sandbar formation is a regular phenomenon in winters, this year the silting is unprecedentedly high. This has forced at least four pumps to shut down.”