NEW DELHI: As violence erupted in Kerala over two women breaking the faith barrier in the Sabarimala temple, the Congress protested the development in Parliament, giving adjournment notices on the issue and accusing the state’s Communist government of playing with the sentiments of devotees. 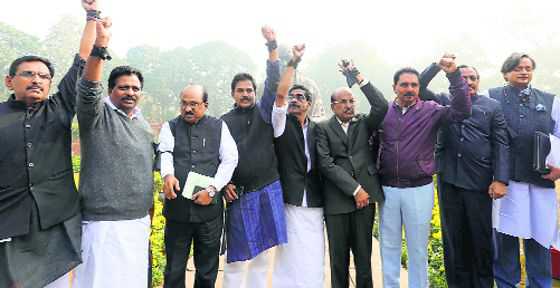 Kerala MPs protest at Parliament House over the entry of two women into the Sabarimala temple, in New Delhi on Thursday. Manas Ranjan Bhui

As violence erupted in Kerala over two women breaking the faith barrier in the Sabarimala temple, the Congress protested the development in Parliament, giving adjournment notices on the issue and accusing the state’s Communist government of playing with the sentiments of devotees.

Congress MPs from Kerala, including former ministers KV Thomas and Shashi Tharoor, protested outside Parliament over the entry of women into the shrine, calling it “sponsored” by the state government.

“We are observing a black day in Kerala. The CPM government in Kerala is challenging the sentiments of Sabarimala devotees. The two young women who entered the temple did so with the sponsorship of the state government. These women are activists. They are Maoists,” K Suresh, Congress MP from Mavelikkara (reserved) said.

Present during the protest was Congress MP and party’s deputy whip in Lok Sabha KC Venugopal. IUML’s PK Kunhalikutty too joined the Congress in the issue. The protests moved outside after the Lok Sabha was adjourned owing to disruptions by 21 MPs of the TDP and AIADMK, who were suspended by the Speaker.

Inside, Kerala MPs NK Premchandran of the RSP, Congress’ KC Venugopal and K Suresh and IUML’s Kunhalikutty moved notices of adjournment to discuss the situation arising out of the entry of young women into the shrine.

The Congress stand on Sabarimala has remained ambivalent. The central leadership says it respects the apex court verdict allowing women of all ages – including the hitherto barred women of reproductive age — to enter the shrine. But Kerala Congress opposes it and has  filed a review petition in the Supreme Court on the issue. The party is clearly competing with the BJP for the attention of Hindu devotees ahead of 2019 Lok Sabha polls. So much so, even Tharoor, who previously supported the SC verdict, revised his position later. Tharoor says he earlier saw the issue as one of equal access but later realised it was that of religion and sanctity.

“Hearing my constituents on the matter, I realised the issue is not of equality but of sanctity. We have in the Hindu religion practices that cannot be reduced to rationalistic propositions. Let’s also not forget that there has never been a mass movement of women seeking entry into Sabarimala temple....”