MUMBAI: The ruling BJP-Shiv Sena combine will face the Congress-NCP and their smaller allies in Monday’s Assembly elections in Maharashtra. According to the Election Commission, 3,237 candidates, including 236 women, are in fray for 288 seats in the state’s legislature. 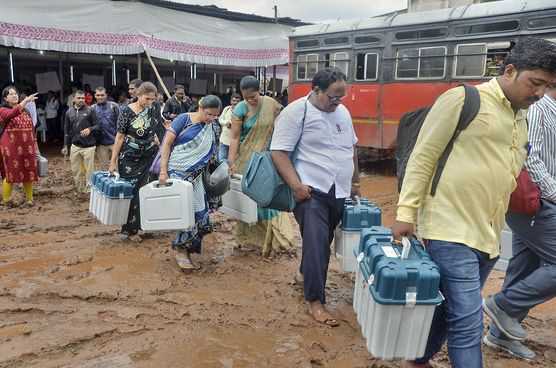 Election officials walk through a damp field as they leave for their polling stations from a distribution centre, in Sangli. Rain and overcast conditions in several parts of Maharashtra threaten to play spoilsport on Monday when 8.98 crore voters are expected to decide the fate of 3,237 candidates in 288 seats. PTI

The ruling BJP-Shiv Sena combine will face the Congress-NCP and their smaller allies in Monday’s Assembly elections in Maharashtra.

According to the Election Commission, 3,237 candidates, including 236 women, are in fray for 288 seats in the state’s legislature. While the main contest is between the two fronts, smaller parties like Prakash Ambedkar’s Vanchit Bahujan Aghadi, All-India Majlis-e-Ittehadul Muslimeen, Bahujan Samaj Party, Maharashtra Navnirman Sena, Peasants and Workers’ Party and Communist Party of India (Marxist) are among several small outfits which are in the fray on many seats.

The EC officials said several polling stations across the state have only women election and police personnel running the show. The Sakhi polling stations have been given a pink get-up, according to officials.

The administration has asked all polling stations in Mumbai to be located on the ground floor of buildings so that they could be accessible to disabled voters.

“We have provided wheel-chairs for disabled voters and made arrangements for their pick-up and drop,” an EC official said in Mumbai.

Among the bigwigs trying their luck at the hustings include Chief Minister Devendra Fadnavis, who is contesting from the Nagpur South-West seat. The Congress has fielded Ashish Deshmukh in the 20-cornered contest.

Other prominent leaders whose fate will be sealed on Monday include former Chief Ministers Prithviraj Chavan and Ashok Chavan of the Congress. While Chavan is contesting from Karad South against Atulbaba Suresh Bhosale of the BJP and 11 others, Ashok Chavan will take on BJP’s Srinivas alias Bapusaheb Deshmukh Gorthekar in the Bhokar Assembly seat and eight other contestants.

The NCP has fielded former Deputy CM Chhagan Bhujbal from Yeola where he is challenged by Shiv Sena’s Sambhaji Pawar and six others. Leader of Opposition in the Maharashtra Assembly Vijay Wadettiwar of the Congress is challenged from his Brahmapuri seat by Sandeep Gaddamwar of the Shiv Sena.

The Leader of Opposition in the Maharashtra Legislative Council, Dhananjay Munde of the NCP, is challenging his cousin and BJP minister Pankaja Munde from the Parli seat, where 14 more candidates are in fray. State BJP chief Chandrakant Patil faces Kishor Shinde of the MNS, who has the support of the Congress and NCP. Aaditya Thackeray, the first from the Shiv Sena’s founding family, to contest an election is livening up the proceedings from Mumbai’s Worli seat.

Results for the polls will be declared on October 24.