NORTH SOUND (ANTIGUA):India took control of the first Test by taking four West Indies wickets after Ravindra Jadeja helped the visitors recover to 297 all out on Day 2. 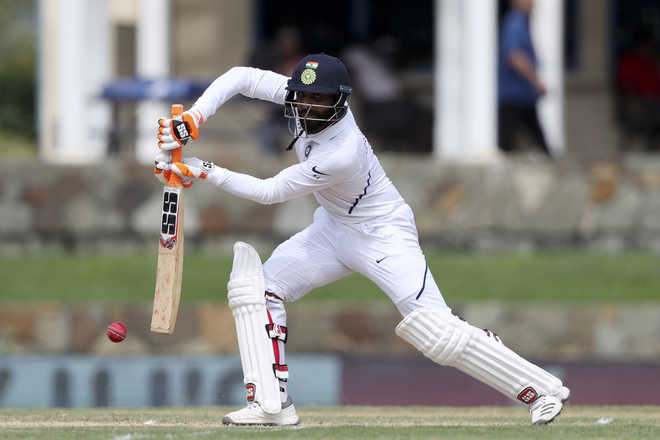 Ravindra Jadeja hit six fours and one six in his knock of 58 runs against West Indies on Day 2. AP/PTI

India took control of the first Test by taking four West Indies wickets after Ravindra Jadeja helped the visitors recover to 297 all out on Day 2.

West Indies were struggling at 82/3 in their first innings at tea, trailing India by 215 runs. After scoring a fighting 58 off 112 balls, Jadeja removed debutant Shamarh Brooks (11) to leave the home team at 50/3. The left-arm spinner had Brooks caught at first slip after his attempted cut ricocheted off Rishabh Pant's thigh to fall into the safe hands of Ajinkya Rahane. The other West Indies batsmen to be dismissed were openers Kraigg Brathwaite (14) and John Campbell (23), dismissed by Ishant Sharma and Mohammed Shami, respectively. Darren Bravo (18*) and Roston Chase (10*) provided the much needed stability to the innings with a 32-run partnership for the fourth wicket.

Earlier, Jadeja and Ishant frustrated West Indies with a timely 60 run-stand for the eighth wicket, helping India reach 297 all out at the stroke of lunch. Jadeja and Ishant were able to negotiate the threat posed by the potent pace duo of Shannon Gabriel (3/71) and Kemar Roach (4/66) after losing Rishabh Pant (24) in the second over of the day.

India resumed the day at 203/6 with Pant (20) and Jadeja being the overnight batsmen. Roach got his fourth wicket of the innings when he dismissed Pant with a beauty from around the wicket that moved away enough to get the edge of the young wicketkeeper-batsman. Pant was guilty of playing the ball with hard hands as skipper Jason Holder took a regulation catch at second slip, leaving India at 207/7. Jadeja and Ishant batted sensibly in their 116-ball stand, defying the West Indian pacers. — PTI

Virat Kohli finds nets “claustrophobic”, and thus he prefers to practise batting on a centre wicket with fielders around, as it provides him with match simulation. Kohli gave his opinion during a chat with West Indies legend Vivian Richards, the video of which was posted on the Indian cricket board’s official website. “I felt like this many times where the pitches are fast and bouncy, or even in the nets when you are playing, I am sure you wouldn’t go to the practice just randomly practising,” Kohli said, seeking the opinion of Richards on his approach to net practice. “You would go with the intent, with the purpose that I’m going to stand up against my own bowlers and not get out, not even hit a ball on the edge, hit everything from the middle of the bat.” — PTI