JAMMU:The Pakistan army raised a white flag at the Line of Control (LoC) to retrieve the bodies of two of its soldiers killed recently by the Indian Army in retaliatory fire at the Hajipir sector of Pakistan-occupied Kashmir 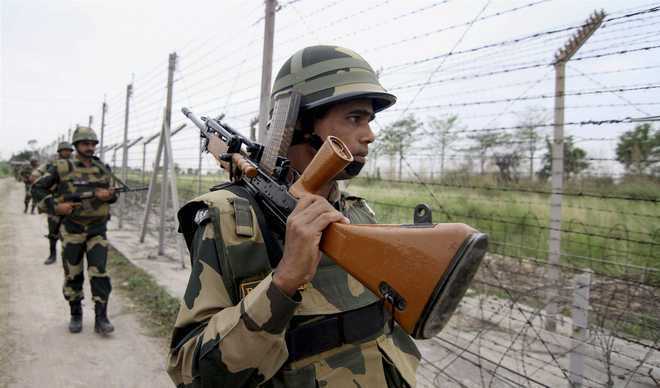 A video showing Pakistan army personnel retrieving the bodies of its soldiers while raising the white flag has gone viral on the social media. The Hajipir sector in PoK runs parallel to the Uri-Poonch stretch on the Indian side.

In the video, Pakistani soldiers were seen holding a white flag and retreating back with two bodies of their dead soldiers. A white flag symbolises surrender, truce or a desire for dialogue.

Army sources said the bodies were retrieved by Pakistan on September 13 following two days of unsuccessful attempts. “Earlier, all their attempts to take the bodies by force had been foiled. Later, we allowed Pakistani soldiers to claim the bodies of the two dead soldiers after they raised the white flag, which is a gesture of peace,” the sources added.

Pakistan had violated ceasefire along the LoC in the Hajipir sector on the intervening night of September 10 and 11. “Pakistan’s unprovoked ceasefire violation and firing forced the Indian Army to go in for strong and effective retaliation,” the sources said, adding that “the first soldier was killed on September 10 while the other soldier was killed while making an attempt to retrieve the dead body”.

Sepoy Ghulam Rasool, a native of Bahawalpur in the Pakistani province of Punjab, was killed on September 10, the sources said.

“Despite the killing of its soldier in retaliatory firing, the Pakistan forces did not stop firing at Indian posts. Their soldiers tried to recover the body by providing cover fire. However, another Pakistan soldier Havaldar Nasir Hussain was shot dead during attempts to retrieve Rasool’s body. Hussain belonged to Narowal in Pakistan’s Punjab province. Their repeated attempts to retrieve the bodies failed after which Pakistan soldiers were forced to raise the white flag,” the sources said.

The Sources, however, claimed that Pakistan was yet to claim the bodies of five Border Action Team (BAT) Special Services Group commandos who were killed during an infiltration attempt in the last week of July in J&K’s Keran sector. “These bodies are still lying unclaimed by Pakistan,” sources said.

Pakistan has repeatedly been violating the truce pact along the LoC, forcing the Indian forces to retaliate in equal measure.

‘A gesture of peace’

"All attempts (of Pakistan army) to take the bodies by force were foiled. We allowed Pakistani soldiers to claim the bodies of the two soldiers after they raised the white flag, which is a gesture of peace."  — Army sources

Islamabad: Pakistan on Saturday summoned India’s Deputy High Commissioner Gaurav Ahluwalia to protest the killing of a woman in an alleged ceasefire violation by the Indian troops along the Line of Control. Pakistan claimed a 40-year-old woman was killed on September 14 along the LoC in Nikia sector. PTI