NEW DELHI:An increase in pension of almost 25 lakh retired soldiers hangs in the balance. The ‘equalisation’ of pension for the veterans may not happen immediately following objections raised by a wing of the Ministry of Defence (MoD). 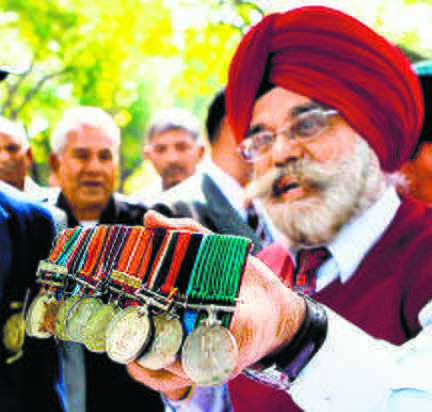 An increase in pension of almost 25 lakh retired soldiers hangs in the balance. The ‘equalisation’ of pension for the veterans may not happen immediately following objections raised by a wing of the Ministry of Defence (MoD).

It will need some tough decision-making from newly appointed Defence Minister Rajnath Singh.

The ‘One Rank One Pension’ (OROP) for soldiers was implemented with effect from July 1, 2014, and a gazette notification said pension would be equalised after five years — that is July 1, 2019. The term ‘equalised’ means all soldiers who retired in same rank and with same length of service will be on a par in terms of pension.

Read impact of this story here: Rajnath forms committee on soldiers’ pensions, to submit report in a month

Now, the Controller General of Defence Accounts (CGDA) has asked the Department of Ex-servicemen Welfare in the MoD to clarify “whether any logic exists to initiate the process of OROP revision (equalisation) once the pension of past and current pensioners was equated on January 1, 2016”. The revision in 2016 was done following the 7th Central Pay Commission (CPC).

In simpler words, the CGDA is asking if pension should be revised now, that is five years from the original OROP cut-off date, or should it be revised later since it was revised from January 2016.

The Indian Ex-Service League headed by Brig Kartar Singh (retd) has shot off a letter to the secretary of the Department of Ex-servicemen Welfare, saying as per the notification for OROP, equalisation is to be done after five years. “There should be no doubt in the mind of any pension authority,” the League said. Retired soldiers have pointed out that increase in pension under the 7th CPC is not ‘equalisation’ of pension under OROP.  Under OROP, pension is ‘equalised’ and not ‘revised’. Upward revision of pension due to implementation of the 7th CPC    should not in any way be linked to OROP equalisation.

Notably, in the ongoing fiscal, Rs 1,12,080 crore has been allocated for defence pensions. The services are literally weighed down by bulging ‘establishment’ costs — salaries and pensions. The salaries of the three services and the civilians work out to be Rs 1,19,559 crore and now form 37 per cent of the budget of Rs 4,31,011 crore. Salaries and pensions take up more money than what is allocated for modernisation.