KURUKSHETRA: Prime Minister Narendra Modi on Tuesday said the entire country was preparing to celebrate the 550th birth anniversary of Guru Nanak. He said he was happy that the Kartarpur corridor project was about to be completed soon. 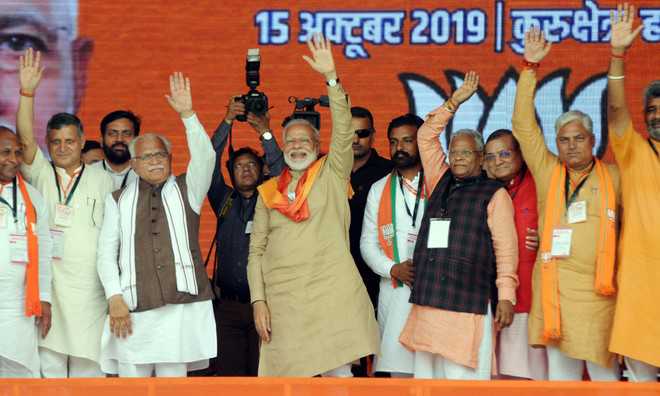 Prime Minister Narendra Modi on Tuesday said the entire country was preparing to celebrate the 550th birth anniversary of Guru Nanak. He said he was happy that the Kartarpur corridor project was about to be completed soon.

Addressing a rally in Thanesar, he said, “We are fortunate to get a chance to rectify to some extent the political and strategic failures that happened seven decades back.”

“We will continue to take decisions for the welfare of people of this country. Not only policy making, governments must pay more focus on the last mile delivery as well. Beneficiaries must get the benefits of policies,” he said.

He praised the Haryana Government for giving jobs on merit and bringing in transparency in jobs. He said road and rail connectivity had strengthened. He said Manohar Lal Khattar government had ended the transfer industry.

He claimed that the transfer industry had a rate card and corrupt ministers and officials used to mint money. He said before 2014, the government used to have its eyes on votes and land of farmers. He pointed out that old policies related to purchase of land had been changed.