Spain on brink of Euro qualification

GIJON (SPAIN):Rodrigo and Paco Alcacer both scored twice as Spain eased to a 4-0 victory over the Faroe Islands in Gijon on Sunday to make it six wins from as many Euro 2020 qualifiers and inch closer to next year’s tournament. 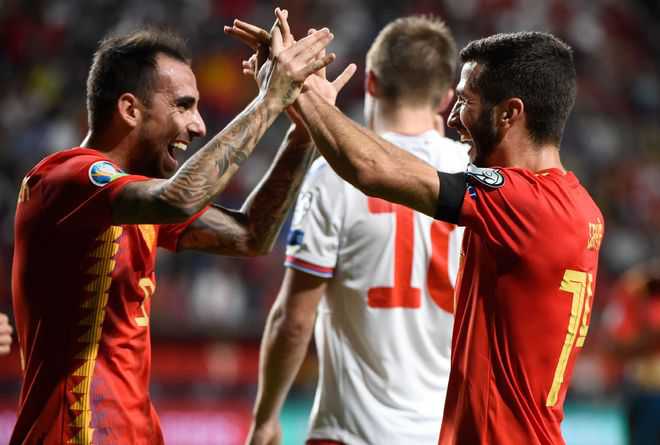 Rodrigo and Paco Alcacer both scored twice as Spain eased to a 4-0 victory over the Faroe Islands in Gijon on Sunday to make it six wins from as many Euro 2020 qualifiers and inch closer to next year’s tournament.

Captain Sergio Ramos equalled Iker Casillas’ national appearances record with his 167th cap, but otherwise it was a low-key affair at El Molinon.

Spain now sit seven points clear in Group F after preserving their 100 percent record as second-placed Sweden were held to a 1-1 draw by Norway. “Yes, it’s almost done, but not yet mathematically,” said Spain coach Robert Moreno when asked if his team had all but qualified with four games to spare.

Tampere (Finland): Jorginho fired Italy to within touching distance of Euro 2020 with a spot-kick winner that beat nearest rivals Finland 2-1 on Sunday and maintained his side’s perfect qualifying record.

Chelsea midfielder Jorginho’s 79th-minute penalty in Tampere made it six wins from six for Roberto Mancini’s side and sent them six points clear of the second-placed Finns in Group J, after in-form Norwich City striker Teemu Pukki had levelled Ciro Immobile’s headed opener with a penalty of his own six minutes before.

With two teams qualifying from the group,  Italy are flying high with a maximum 18 points with four qualifying games to play, nine points ahead of third-placed Armenia despite their thrilling 4-2 win over Bosnia and Herzegovina earlier. — AFP