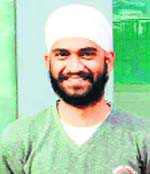 The youth worked with a reputed company in Bengaluru, drawing a salary of Rs 18 lakh per annum. The condition of four of the victims is grave. The police opened fire, overpowered the youth and shifted him to a hospital where he succumbed to bullet injuries, Karimnagar Deputy Superintendent of Police J Rama Rao said.

He was being treated for depression. He had an argument with his parents Avataar Singh and Sathvanth Kaur. In a fit of rage, he attacked them with a sword. He rushed out of the house screaming, and attacked a car, damaging the windshield. He then began terrorising people, chasing them and attacking them with the sword.

He stopped an autorickshaw and attacked the driver, causing injuries to his hands as the latter tried to shield himself. Later, he attacked constable MM Ali.

Constables Mallaiah and Vali tried to stop him. They too were attacked. As the situation appeared getting out of hand, Circle Inspector Vijayasaradhi opened fire, took the youth into custody and shifted him to the district headquarters hospital for treatment.

The injured civilians and constables are also being treated at the hospital.