The tough, second stint for the matriarch

THE Congress&rsquo; story of Sonia Gandhi&rsquo;s return as AICC chief may appear a bit bizarre or just a gimmick, but it is the best recipe under the present circumstances. 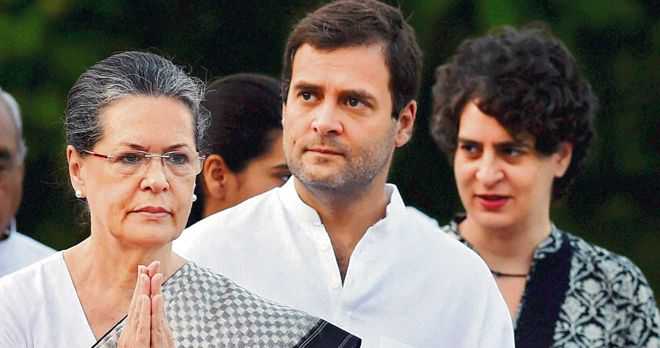 All about basics: The Congress leadership has to stay in the hands of the three Gandhis: Rahul, Priyanka and Sonia.

THE Congress’ story of Sonia Gandhi’s return as AICC chief may appear a bit bizarre or just a gimmick, but it is the best recipe under the present circumstances. Notwithstanding the public and media outcry, some ‘basics’ about the grand old party need to be understood.  For instance, the political leadership of the Congress was to stay in the hands of the three Gandhis — Rahul, Priyanka and Sonia Gandhi. Even when Rahul had offered to step down, owning moral responsibility of the 2019 Lok Sabha debacle, he had resolved to stay on and fight it out. Sonia was the elected representative from Rae Bareli and chairperson of the Congress Party in Parliament (CPP) while Priyanka Gandhi Vadra continued to be AICC general secretary. The Gandhi trio was suppose to campaign for the party in the coming round of the Assembly polls of Haryana, Maharashtra, Jharkhand and Delhi.

The 75-day search for Rahul’s successor, therefore, revolved around finding a person who would become the head of the organisation and act as an important link between the AICC secretariat, the Gandhis and rest of the party. At no point of time did the Congressmen envisage looking for a person who would politically replace or outwit the Gandhis.  Several names were deliberated upon, ranging from Mallikarjun Kharge, Mukul  Wasnik to Sushilkumar Shinde and others. Some well-meaning persons like Capt Amarinder Singh suggested a generational change, but there were few takers within the party. Another thought gained currency: to have an interim chief in the Kharge-Shinde mould and accommodate the young lot such as Jyotiraditya Scindia, Sachin Pilot and Milind Deora.

While these talks and deliberations were taking place, political developments, such as collapse of the HD Kumaraswamy government, scrapping of Article 370, bifurcation of Jammu & Kashmir, deterioration in Indo-Pak ties and large-scale desertion from the Congress, particularly in the Rajya Sabha, had a tremendous demoralising effect on the party. The row over the abrogation of Article 370 was grave in the sense that it led to a virtual split in the party. From Karan Singh to Ashwani Kumar to Scindia and Deora, everyone rushed to tear into Ghulam Nabi Azad’s line of argument.

At that crucial juncture, the Congress central leadership failed to articulate two important issues. ‘Constructive dissent’ has always been part of grand old party’s chequered history. Old-timers would recall how Atulya Ghosh had sought special permission from the then Speaker of the Lok Sabha to air Bengal Congress’ views on Dhanbad-Purnia during 1956 reorganisation of states. It so happened that the AICC had a certain view on Dhanbad's separation from Manbhum district of Bengal, while the Congress Legislature Party (CLP) in the Bengal Assembly under BC Roy had another. The Bengal Congress under Ghosh had its view independent of its high command and the legislative wing. Unlike the Left’s concept of ‘democratic centralisation’ where even a decision arrived by 51 for and 49 against is dubbed as ‘unanimous’, the Congress legacy has been different.

Secondly, absence of ideology makes the Congress extremely vulnerable on emotive issues. If any headcount is taken, 100 out of 100 in the BJP would opt for the construction of a Ram temple in Ayodhya, regardless of the court verdict, but in the Congress, a 50-35-15 ratio may favour the construction of a temple, temple-mosque and mosque, respectively. This was a reason, perhaps, why successive Congress regimes failed to reform or amend the Muslim Personal Law (Shariat) Application Act, 1937, that might have swivelled the focus on contentious issues, like alimony, instant triple talaq, polygamy and age of consent.

Sonia’s second stint as party chief may not last very long, but it is crucial. 1998 onwards, when she took over, toppling Sitaram Kesri, Sonia failed miserably to bring a culture of accountability and transparency. Caught between her affection for her son and her sense of belonging towards the Congress organisation, Sonia Gandhi kept walking half-way through. Sonia’s survival instincts had a script of keeping everyone together — the Japanese method of holding maximum consultations and hammering out consensus instead of purging dissidents, taking drastic actions or firm positions. In the past 20 months, when her son Rahul tried to reform the party, Sonia remained indifferent on working out a compromise between those representing Rahul and the organisation. From a distance, it looked good, but deep inside, both sides were unhappy and bitter.

Now that everyone in the party is getting edgy and short of patience, Sonia has a task cut out for her that goes beyond her survival kit. The late Jaipal Reddy had once described her as one of the ‘finest students’ of the ‘University of Life’. Sonia has to prove that from the word go. There are several challenges facing her: All eyes are on the Rohtak rally on August 18. Can she avert a split in the Haryana Congress? Also, will she dissolve the CWC and hold fresh party polls? Can Sonia direct Priyanka Gandhi to focus on Uttar Pradesh for the 2022 Assembly polls by making her the UPCC chief?