A bygone era on canvas at SG Thakar Gallery in Amritsar 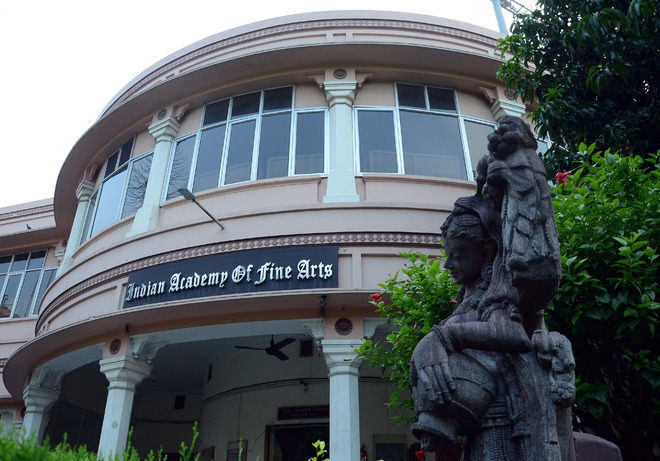 Old world charm A decorative sculpture at the entrance with the facade of the SG Thakar Singh Art Gallery in the backdrop.

Art galleries are known to give a glimpse into the era gone-by. These not only feature eminent works by several artists but also serve as a cultural space for art enthusiasts.

The holy city is known for its old world charm. Apart form being a spiritual hub, it is also a focal point of art and culture. Bearing testimony to this fact is the SG Thakar Singh Art Gallery situated in the heart of the city. Run by the Indian Academy of Fine Arts Amritsar (IAFA), it is one of the oldest and the most prestigious art institutions of India. Established in 1928 by Thakar Singh other members, including Master Gurdit Singh, another eminent artist of that time with the help of other artists, the academy initially also ran the Thakar Singh School of Arts. Started from one room, the gallery now has three exhibition halls, an auditorium and several workshops and demonstration rooms. Works of eminent artists from the city and the region, including Sobha Singh, Phulan Kaur, Arpana Caur, OP Verma, Baldev Gambhir, Shivdev Singh and others also find place here.

SG Thakar Singh, one of the most celebrated artists from the region, was born in Verka, in 1899. He became the state artist for more than 10 princely states at the time when India was under the British Raj. His first commercial work got him Rs500 when he was only 18 years of age. Most of his portraits of royals and dignitaries adorn places such as Pataudi Palace, Parliament House and Kolkata Museum. Among his most celebrated works is his painting ‘After Bath’ that won the second prize of £800 at the British Empire Exhibition in London in 1924. It was later owned by the Maharaja of Patiala.