Use of painting by Punjab govt unethical: Sobha Singh’s daughter 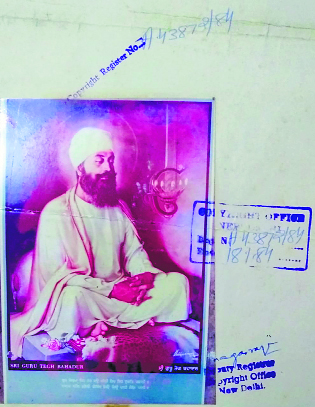 Gurcharan Kaur, daughter of legendary painter Sobha Singh, has expressed resentment over “unauthorized use of a painting” of Guru Teg Bahadur by the Punjab government in its calendar for the year 2021.

Gurcharan Kaur who stays in Andretta village near Palampur and manages the Sobha Singh Art Gallery, while talking to The Tribune, said that she has been informed that the public relations department of Punjab was publishing official calendar for 2021 with copy of painting created by the legendary artist. “It is unethical on the part of the Punjab government to use painting without our permission. It was also a violation of the Copyright Act and I have written to the Chief Minister, Punjab, Capt Amarinder Singh regarding this illegal act of the Punjab government”, she said.

Gurcharan Kaur said that she was not objecting to the authorized use of the painting by the Punjab government authorities. It was a question of ethics. Recently, Hallmark printed 300 gold coins with painting of Guru Nanak etched over it, in England. Since the painting was created by Sardar Sobha Singh the Hallmark took permission from her.

A large numbers of paintings of Sobha Singh were being printed across Punjab in an authorized manner. “We have been complaining to various authorities in Punjab to check the authorized use of paintings of Sobha Singh. In some cases the action was also taken by the authorities. However, in case the government does an illegal act of copying the paintings, it would encourage other also,” she said.

Anindita Mitra, Director, Public Relations Punjab, when contacted, that said she would take the charge tomorrow and knows nothing about it at present.

Senu Dugggal, joint director, Public Relations, Punjab, when contacted, said that she does not know anything about

Gurcharan Kaur who lives in the house of Sobha Singh in Andretta village also runs a Sobha Singh Memorial Art Gallery in the house. Thousands of visitors from across the world visit the gallery every year. The gallery has more than 50 original works of the legendary painter displayed for