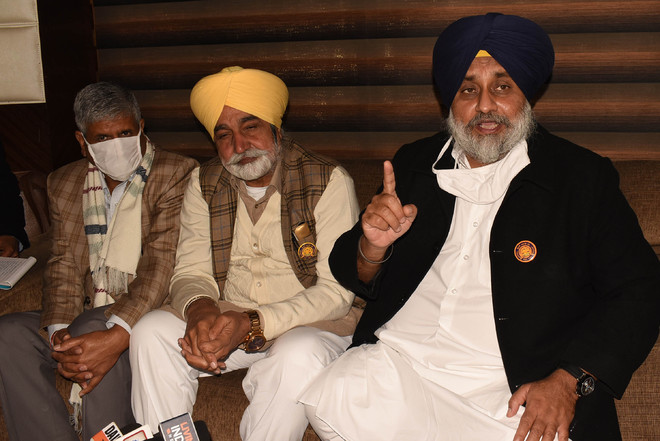 Sukhbir Singh Badal addresses the media in Bathinda on Tuesday.

“The BJP has smashed national unity to pieces. It’s shamelessly inciting Hindus against Muslims and now desperate to set peace-loving Punjabi Hindus against their Sikh brethren, especially farmers. It is pushing patriotic Punjab into communal flames,” he said.

The BJP has been resorting to dangerous conspiracies to sabotage the atmosphere of peace and communal harmony just for petty political goals. — Sukhbir Singh Badal, SAD president

Blaming the BJP of trying to replace the bonds of blood with bloodshed, Sukhbir said if one agreed with the NDA government, he was a ‘desh bhakt’ (patriotic), but if not, he was an anti-national or from the ‘tukde tukde’ gang.

“The BJP has been resorting to dangerous conspiracies to sabotage the atmosphere of peace and communal harmony just for petty political goals. The BJP leadership must realise that the party has become the most powerful divisive force today. It has been resorting to dividing the country and its people by spreading hatred in the name of religion,” Sukhbir said.

Referring to the ongoing farmers’ movement, he said the whole country, except the BJP, acknowledged the debt all owed to patriotic farmers and soldiers. “The BJP is provoking the people to deny that debt. It believes only in emotionally exploiting the farmers’ sacrifices but remains so ungrateful to them that it is painting them as anti-national. Today, it is the farmers. Nobody knows what the BJP might say even about soldiers tomorrow if it suits the party,” he said.

Sukhbir was in the city to boost the morale of party cadre ahead of the Municipal Corporation polls in Bathinda. He addressed the workers at Handi Resort in Bathinda where former councillor and Congress leader Bant Singh Sidhu and others joined the SAD. Addressing mediapersons, Sukhbir said the screening committee of the party would finalise the names of the candidates for the MC polls.