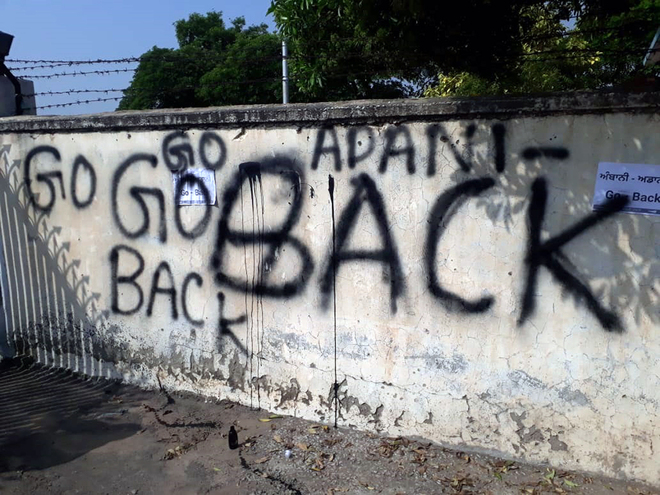 A defaced wall of Adani Group’s silo at Dagru village in Moga after the AAP staged a protest against corporate houses in the district. Tribune photo

Corporates have started feeling farmers’ heat in the state over the three agriculture Acts with a protest being held outside a Reliance petrol pump in Talwandi Sabo in the district.

The Bharatiya Kisan Union (Ekta Ugrahan) has announced that they would gherao petrol pumps, malls and toll plazas of Reliance and other MNCs across the state in the coming days. Besides, messages are being circulated among farmers on social media, appealing for the boycott of Reliance fuel and Jio SIM cards.

“The Acts framed on the pretext of ‘one nation, one mandi’ is a bid to give control to the private players. Ambanis and Adani have a big hand in getting the farm legislations through. These will impact the farmers adversely,” alleged Resham Singh Tungwali, a farmer leader.

He threatened if the Acts were not revoked by the Union Government, they would gherao Guru Gobind Singh Refinery at Rama Mandi.

Farmers also claimed that the government had left them at the mercy of corporates. “It is preposterous to believe that farmers who have small land holdings will have any bargaining power over private players,” they said.

Shingara Singh Mann of BKU (Ekta Ugrahan) said: “Our target now will be PM Narendra Modi, BJP and corporate houses, such as Ambani and Adani groups. We will meet tomorrow to decide on the gherao of Reliance petrol pumps and malls.”