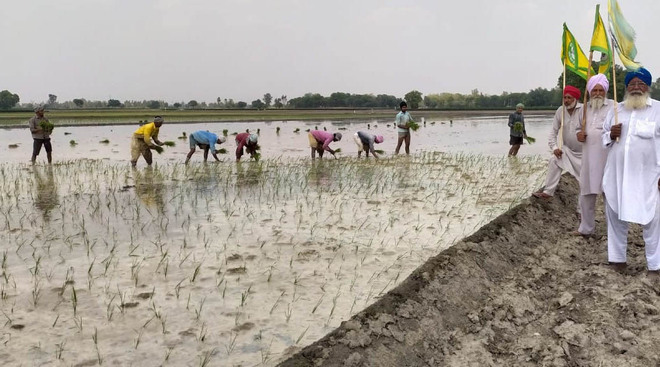 Not waiting for the official June 10 date for the start of the paddy transplantation, several farmers with the support of unions have started transplantation in many villages of Mansa and Bathinda districts in the region.

At some places even leaders of farmer unions are making farmers transplant paddy, giving thumbs down to the state government’s schedule. Even activists are holding farmer union flags in the fields while planting paddy.

The BKU (Ekta Ugrahan) has also announced that their village unit will keep a vigil on the paddy transplanted and would gehrao police or Agriculture Department officials if they try to stop the work. They also assured nobody will be allowed to uproot the planted paddy.

BKU (Ekta Ugrahan) district president Ram Singh Bhainibagha said: “Canals and water channels are running dry. The government has just assured power for motors from June 10. In view of the shortage of labour, farmers have started transplanting paddy”. Farmers have started paddy transplantation in Bhainibagha village in Mansa and various other villagers which have a good influence of farm unions.

The state government had notified that no farmer in the state would be allowed to transplant paddy before June 10. Earlier, transplantation of paddy used to begin on June 1, but from the last few years, the government has been delaying the practice to check the declining water table in the state, reduce the burden of subsidy and improve the quality of basmati.

Farmers said the reason behind the early transplantation was shortage of labour as the number of migrant labourers from Bihar, UP and other states, who used to come to Punjab during the paddy season, declined drastically last season. Officials of the Agriculture Department said it had come to their notice that early transplantation of paddy was going on in some villages and they would soon take action.