As paddy sowing has picked up pace in the region, farmers of various villages here have been hit hard by shortage of labourers 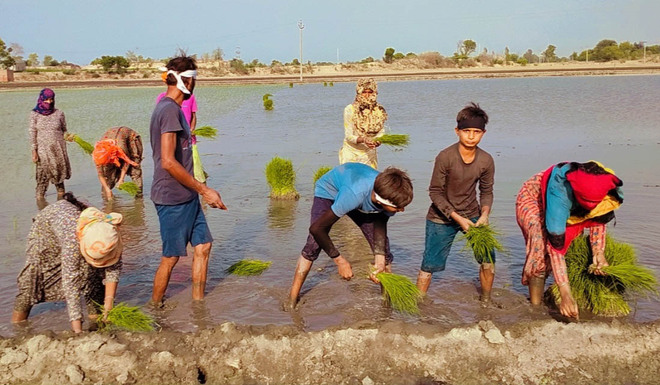 Women and children working in a paddy field in Mansa on Wednesday. Tribune photo

Facing shortage of migrant labourers, farmers have roped in women and children for paddy transplantation in the fields. As paddy sowing has picked up pace in the region, farmers of various villages here have been hit hard by shortage of labourers.

According to farmers, a large number of labourers, belonging to Bihar and Uttar Pradesh, have not returned this time. Those who have arrived are asking for high wages along with other facilities, which were unheard of two years ago.

Paddy transplanting machines are still not popular among members of the farming community. Many farmers still prefer manual transplantation to mechanisation.

The farmers point out that the shortage of labourers has also raised the wage cost considerably, thus adding to the already high input cost. Labourers, who otherwise charge Rs 2,800-3,200 for transplanting paddy on an acre, have now started demanding Rs 4,500-5,000 per acre for the job. Farmers are roping in local labourers who are charging around Rs 3,500.

Paddy transplantation is a labour intensive exercise in which at least two to three workers per acre are required. Though the state government is also encouraging them to opt for direct seeding of rice (DSR), a less labour-intensive method, a large number of farmers in Punjab go for the transplantation method.

With migrant labourers in short supply, women are being engaged at many places to do the job. Manjit Singh of Gobindpura village said besides women, children of local labourers were being engaged in transplantation as they were free due to their summer vacation. Punjabi labourers, who have in the past decade or so taken up jobs in urban areas, are also being persuaded by farmers to help them out.

Shingara Singh, a BKU leader, said it was a common practice in Punjab for women to help in paddy transplantation. But this time, the number had increased due to the shortage of migrant labourers.

Gurpreet Singh of Gillpati village said “The situation is likely to improve in coming days as migrant labourers will start coming in the region in a day or so due to advancement of monsoon season, the paddy sowing will pick up pace but high wages are still a concern”.