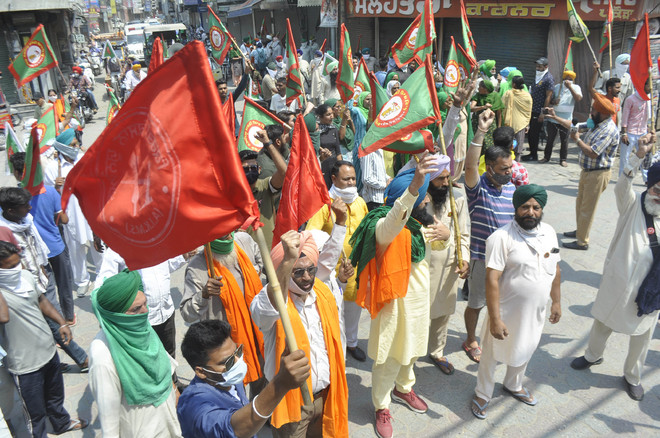 The protest call by farm unions against lockdown got a tepid response in the state today amid weekend restrictions in the wake of rising Covid-19 cases. Markets in various districts remained closed even as protests were held by unions pledging support to traders.

In Bathinda, the unions, on a call given by the Samyukt Kisan Morcha, had planned marches and rallies against the lockdown, urging traders to open shops/outlets. However, shopkeepers did not comply with them.

Amit Kapoor, state president, Punjab Pradesh Beopar Mandal, said: “We support farmers but considering the raging pandemic, we decided not to open shops. We do not want to risk people’s lives.”

While farm unions, including the BKU Ekta Ugrahan, BKU Sidhupur, BKU Lakhowal, BKU Dakonda and Punjab Kisan Union among others, carried out rallies and protest marches in city areas and different blocks of Bathinda and Mansa, shopkeepers and traders largely kept their shops closed.

There were instances where farmers convinced shopkeepers to open shops, but the police intervened and got these closed.

DSP Gurjit Singh Romana said: “We had carried out a march in the city to ensure lockdown restrictions are duly adhered to. No shop was open in Bathinda city.”

Members of various farmer unions demanded withdrawal of lockdown orders as they protested in various parts of Sangrur and Barnala districts and raised slogans against state and Union governments.

While a majority of shopkeepers supported the protest, they did not open shops. “We know farmers are protesting for us, but we cannot open shops as the police will register FIRs against us,” said a shopkeepeer at Bhawanigarh. In Amritsar, too, traders did not pay heed to the farmers’ call even as anti-lockdown protests and marches were carried out in different parts of the city and rural areas.

In Fatehgarh Sahib, none of the farmer leaders visited marketplaces to protest the lockdown as traders had decided not to open shops. A complete lockdown was witnessed in Sirhind, Mandi Gobindgarh, Amloh and Bassi Pathana towns of the district as no shops, barring those of chemists and doctors, were open.

(With inputs from Sangrur &Fatehgarh Sahib)