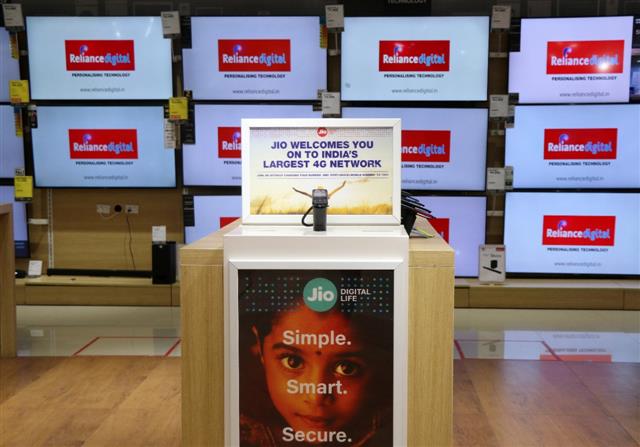 A Jio mobile phone is on display inside a digital store of Reliance Industries Ltd, Mumbai, India, on October 7, 2020. Reuters file photo

The Sensex and Nifty closed with modest losses on Monday, pressured by market heavyweight Reliance Industries which slipped after delaying the launch of its low-cost smartphone.

Reliance Industries was the top loser in the Sensex pack, shedding 2.22 per cent, after Jio delayed the launch of its ultra-low-cost smartphone it is developing with Google, to Diwali, possibly due to the semiconductor shortages plaguing the industry.

JioPhone Next was previously slated to be launched on Friday (September 10).

ICICI Bank, HUL, HDFC Bank, M&M, IndusInd Bank and Tech Mahindra were among the other laggards, dropping up to 1.79 per cent.

On the other hand, TCS, Bharti Airtel, Bajaj Finserv, Tata Steel, Maruti and Kotak Bank were among the gainers, climbing as much as 1.38 per cent.

Market breadth was positive, with 20 of the 30 Sensex stocks closing in the green.

“Indian indices extended its early losses in a volatile session, ahead of the release of domestic inflation data. Despite hopeful signs, the global markets failed to inspire Asian markets.

S Ranganathan, Head of Research at LKP Securities, said indices remained range-bound after a stellar run during the past few weeks, making India one of the best-performing markets globally last month.

“Action however was seen in select small and midcap names as consolidation in several sectors have benefited select companies who have used the pandemic to gain share. Market participants were however picking their spaces as valuations are pricey with several stocks trading at 3.5x price to book,” he added.

In the broader markets, the BSE midcap and smallcap gauges spurted up to 0.80 per cent.

World stocks were mixed amid concerns over inflation and economic recovery.

Elsewhere in Asia, bourses in Shanghai, Seoul and Tokyo closed in the positive territory, while Hong Kong ended in the red.

Equities in Europe were trading with gains in mid-session deals.

The Indian rupee fell 18 paise to close at 73.68 against the US dollar on Monday, tracking a strong American currency in the overseas market. — PTI