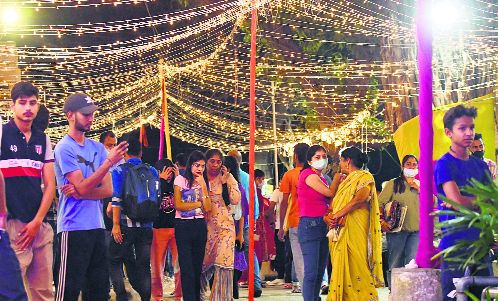 People seen without a mask at a market in Sector 22 in Chandigarh on Monday. Tribune Photo: Pradeep Tewari

Around 60 per cent of the target population in Chandigarh has been fully immunised with Covishield.

Experts see it as an indicator of low magnitude of third wave and lesser severe patients.

Chandigarh: The city on Monday reported four cases of Covid-19. There was no death due to the virus. Five patients were cured of the disease. TNS

No death, 3 fresh cases in Mohali

Mohali: Three fresh Covid cases were reported from the district in the past 24 hours, taking the tally to 68,785. No new death was reported, while two more patients were cured of the disease. Among the new cases, one surfaced in Mohali (urban) and two in Dhakoli. Of the 68,785 positive cases reported so far, 67,683 patients have been cured. There are now 34 active cases. TNS

No fatality, 2 new cases in Panchkula

Panchkula: The district reported two fresh Covid cases on Monday, taking the overall tally to 30,753. The toll remained at 378. While 30,365 people have recovered from the infectious disease so far, 10 cases are still active. The recovery rate stands at 98.73 per cent. TNS

PGI Director Dr Jagat Ram said, “Once vaccination is complete, there are less chances of a re-infection. Even if a person contracts the infection, he/she will have immunity against the virus and the severity will be less.”

“The magnitude of a third wave will be much less with this pace of vaccination. Also, many people got infected during the second wave and they all have immunity against the virus,” he said. “Our priority is a two-dose schedule of the vaccine first. There will come a time when the antibodies from vaccination or infection will fade out and we may need a booster dose. There are several countries administering a booster dose,” said Dr Jagat Ram.

Till now, 9,19,293 beneficiaries in Chandigarh have got the first jab, which translates to vaccination coverage of 109.05 per cent. “Vaccination will definitely decrease the severity of the disease. Our aim is to vaccinate as many as possible so that even if a person contracts the infection, he/she does not land up in the hospital in a critical state,” said Dr Suman Singh, Director, Health Services, UT.