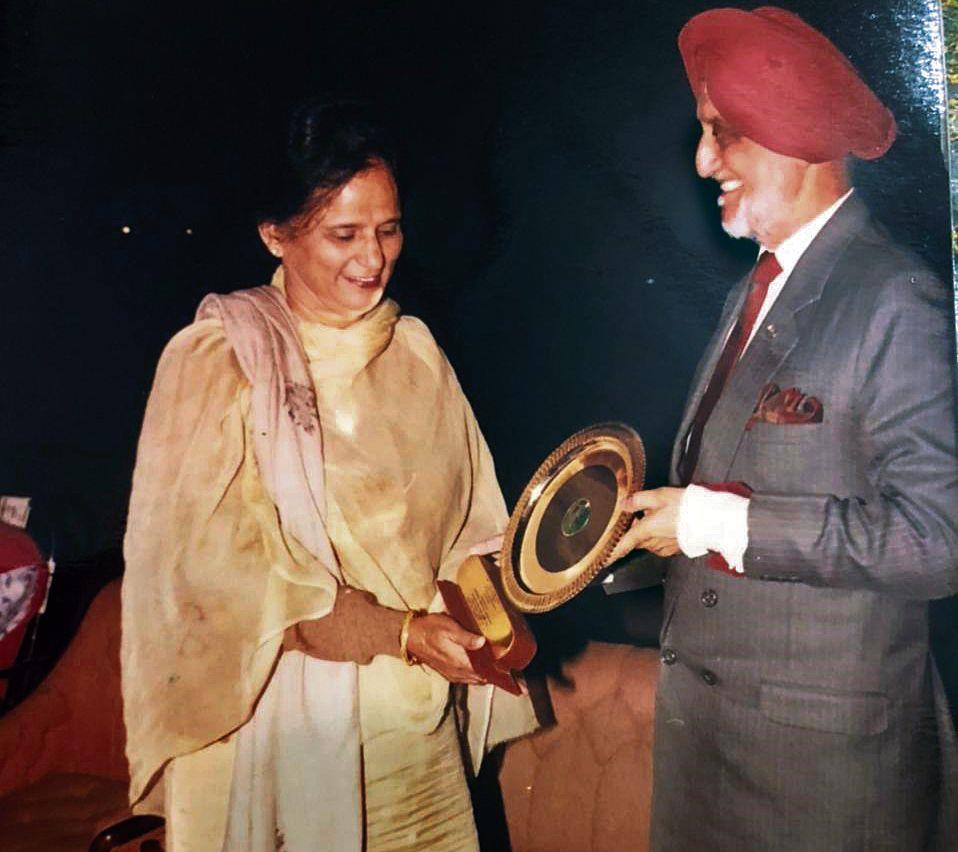 Nirmal Milkha Singh (left) being felicitated by Col Ajit Singh Judge, the then president of the Chandigarh Basketball Association, during a closing ceremony of a championship in 1986-87.

Gloom spread in the sports fraternity as 84-year-old Nirmal Milkha Singh, a blunt administrator, an amiable personality and a philanthropist, lost her battle to Covid-19 this evening. She had tested positive for the virus on May 26 and remained under strict observation till her last breath.

A former captain of Indian volleyball team and wife of former Indian sprinter Milkha Singh breathed her last at a private hospital in Mohali. She was cremated at the Sector 25 cremation ground. The ceremony was attended by her son Jeev Milkha Singh and daughter Mona Milkha Singh and others.

During her tenure, the department laid the foundation stone of the Sector 42 Sports Complex. She took keen interest in promoting sports. Under her supervision, the city hosted three Asian rowing championships, an international equestrian event and many national games. During her tenure with the hockey national body, she conducted various Asian Games camps for hockey in Chandigarh. Nirmal was always ready to help the needy. In one such instance, she helped a teenaged hockey player, who was working as a labourer, after The Tribune reported his condition. She would often ask about the well-being of sportspersons and coaches from media fraternity.

During her last conversation with this correspondent, she was confident of defeating Covid. “I wish Sardar ji (Milkha Singh) gets well soon. How would I survive alone,” Nirmal had said. However, the destiny had other plans.

She was known to be the iron lady of the UT Sports Department. Her contribution to sports was immense and the city still enjoys the infrastructure built under her guidance, said KS Bharti, former Joint Director, Sports, UT.

Punjab Sports Minister Rana Gurmit Singh Sodhi condoled Nirmal’s death. “I am deeply saddened to learn about the death of Nirmala Milkha Singh, which is extremely shocking and unfortunate,” he said.

Prof Jagat Ram, Director, PGI, said, “Widely known for her multiple achievements in the sports arena and her extensive philanthropic works, she will be fondly remembered for her accomplishments on and off the field.”

I’m deeply saddened by the demise of Nirmal Milkha Singh ji. May the Almighty give her family the strength to cope with this mammoth loss. I also wish a speedy recovery of legendary Milkha Singh. —Kiren Rijiju, Union Sports Minister

I am saddened to learn about the death of one of the iconic volleyball players who brought several laurels to the country, making every Punjabi proud. —Capt Amarinder Singh, Punjab Chief Minister

A big loss to the sports fraternity. She was a great personality. May the Almighty give strength to the family to bear this irreparable loss. —Tejdeep Singh Saini, Director, Sports, UT