As the concern over the Omicron variant of Covid-19 grips the city, the UT Health Department has started preparations for a possible third wave.

Chandigarh will have four more oxygen plants of 590 LPM capacity and oxygen tanks of 1,829-litre capacity in private hospitals. This will be in addition to the existing 3,600 LPM oxygen plant capacity of the city.

The department has stated that there is a need for remaining prepared for handling the positivity rate, which may be even higher than the second wave.

Dharam Pal, Adviser to the UT Administrator, is monitoring the preparedness and has issued directions to ensure proper co-ordination with private hospitals.

Both these oxygen plants will be functional by December-end. Mukat Hospital has placed a supply order for a PSA oxygen plant with a 140 LPM capacity and has provided two tanks of liquid medical oxygen with a capacity of 430 litres each.

Dhanwantry Hospital is in an advanced stage of finalising the purchase of a 250 LPM PSA plant. Landmark Hospital has decided to install a tank of liquid medical oxygen with a capacity of 999 litres. However, the Health Department has advised it to go for a PSA oxygen plant without any delay.

The Health Department will hold a review meeting with private hospitals within 15 days.

Panchkula: The district recorded just one fresh case of Covid-19 on Thursday, taking the overall tally to 30,838. The toll remained at 379. While 30,436 people have recovered from the infectious disease so far, 23 cases are still active. The recovery rate stands at 98.69 per cent. TNS 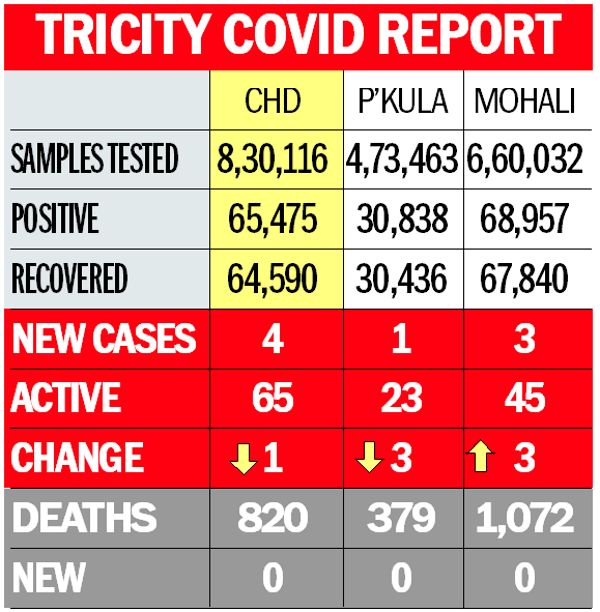