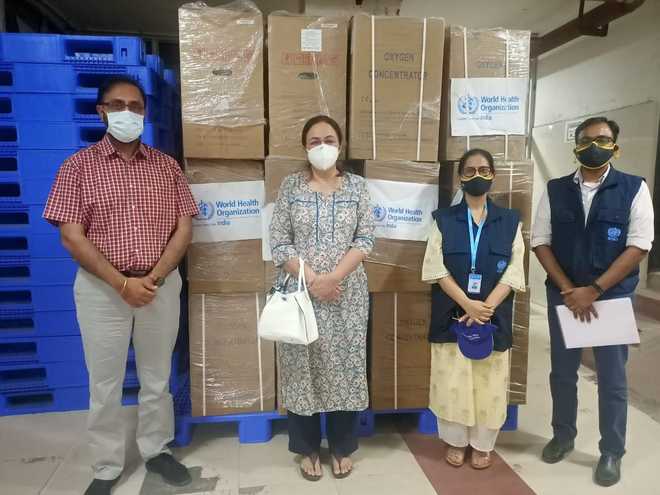 Dr Amandeep Kang, Director, Health Services-cum-MD of the NHM, UT, receives 50 oxygen concentrators sent by the WHO on Monday.

To ensure sufficient oxygen, the UT Administration has decided to increase the quota of oxygen cylinders fixed for private hospitals.

Yashpal Garg, nodal officer for oxygen supplies in UT, said a team of senior doctors from Government Medical College and Hospital, Sector 32, and Government Multi-Specialty Hospital, Sector 16, visited private and government hospitals to educate and sensitise the authorities concerned on optimum utilisation of oxygen, which is a precious commodity.

A considerable amount of oxygen has been saved by ensuring that there is no leakage in the oxygen pipelines and outlets, valves are not left open, oxygen masks are fitted properly over the face of patients, guidelines to maintain the saturation at 94 instead of 100 are followed and flow of oxygen is correct as per the requirement of patients, said Garg.

“The consumption of oxygen by some of hospitals has considerably reduced. May be because of efforts of optimum utilisation and conservation by check on wastage,” he said.

The Centre has fixed the daily quota of 20 MT of medical oxygen for UT from M/s INOX, Barotiwala, which is being utilised for GMCH-32, GMSH-16 and the Covid hospital at Sector 48. Private hospitals, which are mostly dependent upon medical oxygen in cylinders, are also being catered to from this quota.

To ensure smooth supply of oxygen to all healthcare institutions, three private vendors have been authorised for refilling medical oxygen from the UT quota.

The rate for refilling of oxygen cylinders has been fixed and a senior PCS officer has been deputed to see the supply of oxygen to private hospitals.

Daily quota has been fixed for each of the private hospitals and each of these has been attached to either of the three private vendors to avoid confusion and regulate the actual supply.

“Back-up plans have been prepared to ensure uninterrupted oxygen to the patients in case of any delay in arrival of liquid oxygen tanker,” said Garg. “There is co-ordination in tricity on helping each other with liquid oxygen on loan basis in case of any crisis,” he said, adding “about a week ago, there was some crisis in Panchkula which was taken care by UT Chandigarh by providing 3 MT oxygen on loan basis”.

“The same quantity was returned by Panchkula very next day,” he said.

Finances of states and Centre are under severe strain, due t...