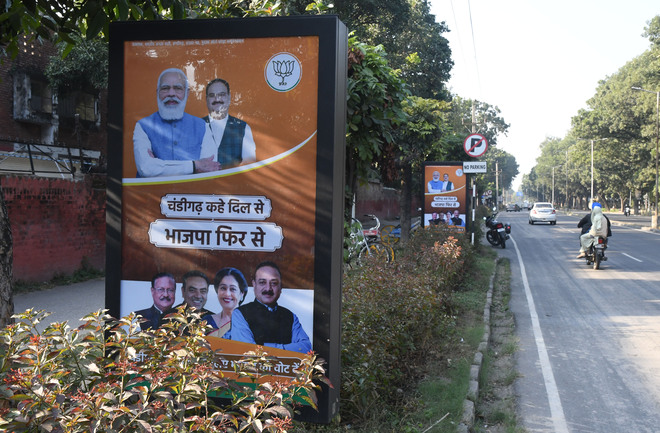 An advertisement war has broken out between the ruling BJP and AAP for the MC elections. The Congress, so far, has preferred to stay away from it. While AAP earlier took a lead in capturing 41 hoarding spaces for advertisement, the BJP has now put up advertisements on 40 cycle docking stations and eight public toilet blocks.

Chandigarh BJP president Arun Sood said, “Through these ads, we will highlight our works such as 24X7 water supply project, additional 29 MGD water for city, CCTV cameras all over the city and cycle tracks. Works done in the transport, health and education sectors will also find space in the ads. Our vision for the next five years will also be displayed.”

Taking a pot shot at rival AAP, Sood said, “They are only displaying “jhadu” and Arvind Kejriwal’s picture as they have no local leadership. What has Kejriwal done? During Covid, Delhi people had to rush to Chandigarh to get treatment. Our city is also placed higher in the education and happiness index than Delhi.”

In reply, AAP convener Prem Garg said, “Kejriwal is our poster boy because he has proved himself in Delhi. We are new in Chandigarh and will be able to show our local strength the next time. In Delhi, we have given 24X7 water supply with free 20,000-litre supply, 200 units of power free of cost, doorstep delivery of government services and mohalla clinics.”

However, Sood alleged that all this was AAP’s gimmick as people ended up paying much more as the tariff was too high above 20,000-litre water supply.

Slamming the ad campaign of both parties, city Congress president Subhash Chawla said, “They have no base among the public; that is why they are doing it. They are spending crores on it, will the councillors be honest in the MC after all this? We are instead focusing on a door-to-door campaign to highlight the “failures” of the BJP. The ruling party is bringing star campaigners? Is Yogi going to spell out the Hindutva agenda in Chandigarh or will Amit Shah tell city people why he failed to do work of city people.”