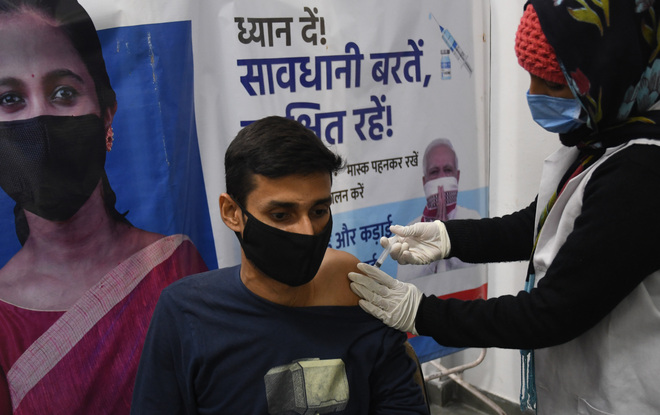 Fearing a surge in Covid-19 cases due to a new variant detected in South Africa (B.1.1.529, Omicron), the UT Administration has asked the Post Graduate Institute of Medical Education and Research (PGIMER) and the Government Medical College and Hospital, Sector 32, to test patients coming to their outpatient departments.

Fearing a surge in Covid-19 cases due to a new variant detected in South Africa (B.1.1.529, Omicron), the UT Administration has asked the Post Graduate Institute of Medical Education and Research (PGIMER) and the Government Medical College and Hospital, Sector 32, to test patients coming to their outpatient departments.

In September, the Health Department had ordered that all patients attending OPDs at the Government Multi-Speciality Hospital, Sector 16, and the GMCH-32 would have to undergo the Covid-19 test. However, city hospitals such as the PGI and the GMCH-32 had stopped testing patients after witnessing a steep fall in the Covid cases.

Only 1,000 tests are being conducted daily in Chandigarh these days, which is far below the single-day testing rate witnessed in September. Over 30,000 tests have been conducted this month, whereas over 59,000 tests were logged in October. Even if the city goes by the present testing rate, it will only be able to conduct 3,000 tests in three days. This month, testing has declined by at least 44 per cent.

The Centre has asked the states to conduct rigorous screening and testing of all international travellers coming from and transiting through Botswana, South Africa and Hong Kong.

The instructions came after a new coronavirus variant was detected in South Africa.

Dr Suman Singh, Director Health Services, Chandigarh, said, “We are going to intensify screening and testing to track Covid-19 cases. The city government hospitals have been asked to conduct tests of patients coming to their OPDs. We never stopped testing patients who were coming to OPDs at the GMSH-16. Besides, all international travellers from South Africa and other regions will be quarantined for seven days and tested on the eighth day. So far, we do not have any travellers from these areas.”

Dharam Pal, UT Adviser, said, “We have issued instructions to all city government hospitals to conduct testing in OPDs and increase the testing levels.”

International travellers are being monitored right from the airport level on their return to India. Persons coming from high-risk countries (South Africa, Brazil, Bangladesh, Botswana, China, Mauritius, New Zealand & Zimbabwe) have to undergo the RT-PCR testing on their arrival in India and are quarantined for seven days. This is facilitated by the UT Police Department. On the eighth day, they are retested (RT-PCR) by the UT Health Department even if they have tested RT-PCR negative at the airport. The teams from the Police Department and the Health Department regularly monitor such high-risk returnees. This is done as per guidelines for international arrivals given by the Ministry of Health and Family Welfare. 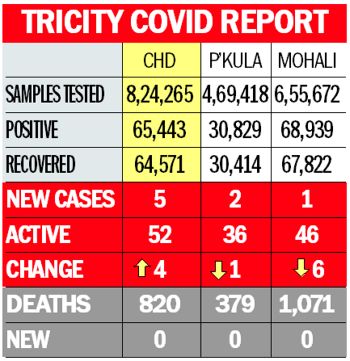 Chandigarh: The city on Saturday reported five cases of Covid-19 and no death due to the infection. Only one patient was cured of the disease in the past 24 hours. TNS

Mohali: One new case of Covid-19 was reported from the district on Saturday. Seven patients were cured of the disease in the past 24 hours. TNS

Panchkula: The district on Saturday reported two fresh cases of coronavirus, taking the overall tally to 30,829. The toll, however, remained at 379. While 30,414 people have recovered from the infectious disease so far, 36 cases are still active. The recovery rate stands at 98.65 per cent. TNS