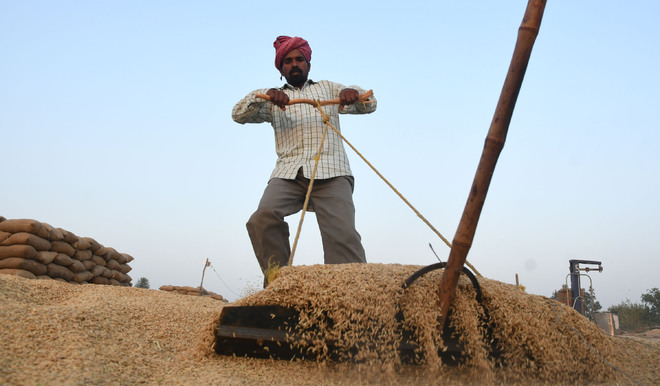 A farmer dries paddy on a road in Zirakpur on Monday. TRIBUNE PHOTO: RAVI KUMAR

The Mohali administration has decided to register FIRs against commission agents (arhtiyas) found selling paddy from other states in various grain markets of the district.

Reviewing the paddy procurement scenario, it was brought into the notice of the Deputy Commissioner that grain markets adjoining the Haryana border tend to face glut and procurement process is hampered due to the unprecedented arrival of paddy from other states via local commission agents.

It was informed that the local civil administration made arrangements for estimated arrival of produce from villages under its jurisdiction, but arrangements tend to fall short due to the illegal sale of paddy from neighbouring states in those grain markets.

Taking a strict note of the transgression, Dayalan directed police officials to establish special interstate border checkpoints so that ‘other state paddy’ might not come in the district. Besides, he issued directions to register FIRs and suspend licences of errant arhtiyas. The Sub-divisional Magistrates have been directed to maintain constant vigil to ensure compliance. — TNS

Dev flashes a double thumbs-up sign from his hospital bed as...