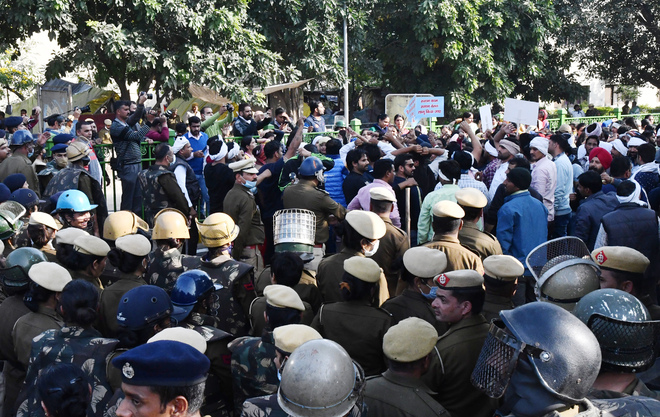 Protesting vocational teachers on their way to Chandigarth to gherao the Haryana CM?s residence being stopped near the Housing Board light point on Friday. Tribune PHOTO: RAVI KUMAR

Vocational teachers, who have been camping at Dharna Sthal in Sector 5 since October 25 over several demands, including better salaries and job security, today once again tried to enter Chandigarh to reach Haryana Chief Minister Manohar Lal Khattar’s residence. They were, however, stopped by the police at the Housing Board light point. Subsequently, a delegation of teachers was taken to the CM’s house for a meeting with senior officials in the government.

The protesters, who reached the Panchkula-Chandigarh border near the Housing Board chowk around 2 pm, finally left the site around 5:30 pm. They said they would continue to sit at the dharna site in Sector 5 (behind the Shiksha Sadan) till the government met their all demands.

The teachers have also been demanding cancellation of an FIR filed against some of them on October 25 when they had entered into a clash with the police in an attempt to gherao the CM’s residence.

The confrontation had left both policemen and teachers injured. In the light of this incident, unidentified teachers were booked by the police under serious charges of rioting and unlawful assembly. The FIR was registered under Sections 147, 149, 186, 283, 323, 332 and 353 of the Indian Penal Code (IPC) at the Sector 14 police station.

Yesterday too, the police had booked vocational teachers for staging a protest outside the Shikhsha Sadan. According to the FIR, the protest left the employees stranded and caused a traffic jam on the road. A case was registered against unidentified teachers under Sections 283 (causing danger, obstruction or, injury in any public way or line of navigation) and 342 (wrongful restraint) of the IPC at the Sector 5 police station.

Anup Dhillon, president, Haryana Vocational Teachers’ Association, said they would not end their agitation till all their demands, including cancellation of the FIR filed on October 25, were met.